The word for inspiration on Inspire Me Thursday this week is “table”. 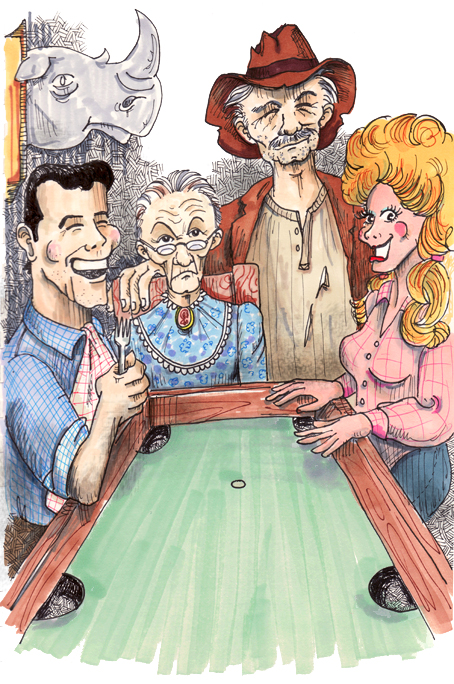 Viacom cable network TV Land added The Beverly Hillbillies  to their line-up of classic television shows. I started watching. I have come to appreciate the social commentary that The Beverly Hillbillies presented. The contrast between the backwoods country ways of the Clampett clan versus the modern hippie culture of the 1960s is priceless. The upscale snobs of Beverly Hills play as the perfect foils against the Clampetts’ genial modesty. The characters were unusual compared to other sitcoms of the time. There was patriarch Jed, who remained a humble mountain man despite having become a millionaire. There was Jed’s mother-in-law, the feisty shotgun-wielding Granny, who did the cooking for the family and was a self-proclaimed doctor. Rounding out the family was Jed’s daughter, the obliviously hot Elly May, who cared more about her “critters” than about the men who were throwing themselves at her and the hunky idiot Jethro, Jed’s nephew. The Clampetts lived in a huge, furnished mansion purchased for them (with their money) by their banker/investment adviser/kiss-ass Milburn Drysdale.

I understand that The Beverly Hillbillies  was not Shakespeare, but it truly worked on a different level that I originally realized. Plus, the show featured famous guests, like Louis Nye, Mel Blanc, Soupy Sales, Paul Winchell, Rob Reiner and Sharon Tate in early career roles.

On the day after Thanksgiving, I was watching an episode of The Beverly Hillbillies  that first aired in 1963. It featured the Clampetts preparing for a traditional Thanksgiving feast, including a live turkey that Jed needs to behead, but Elly has taken as a pet. Jethro and Jed are preparing the “fancy eatin’ table” for the evening’s dinner guests. Jethro explains to Jed that someone told him that the “fancy eatin’ table” is called a “billy-yard (billiard) table” and the room is called a “billy-yard room”. The naive Jethro then gestures towards a mounted rhinoceros head hanging on the wall. “That there must be a ‘billy-yard'”, he says. Jed and Jethro make plans to one day hunt for “billy-yards” and confirm that a sturdy table like this is needed to hold such a large animal.