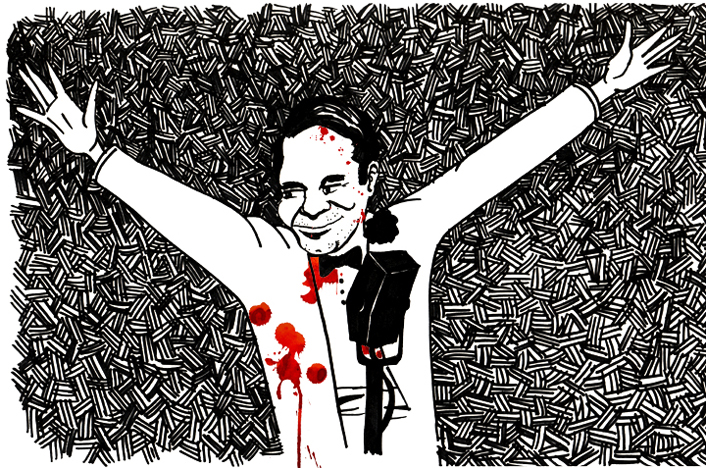 Spotted by a Warner Brothers talent scout while acting in a local Pasadena play, 27 year-old Byron Barr was off to Hollywood. After two years of bit parts, he starred opposite Barbara Stanwyck and Geraldine Fitzgerald in The Gay Sisters  in 1942. He played a character named “Gig Young”. He and the studio liked the name and Byron was renamed Gig Young. He appeared in numerous supporting roles throughout the 40s, leading to two Best Supporting Actor Oscar nominations in the 1950s  playing an alcoholic in 1951’s Come Fill the Cup and an intellectual drinker in 1958’s Teacher’s Pet.

Life imitated art. Young was an incorrigible and sometimes out-of-control drunk. He was married five times including a stormy six years to Elizabeth Montgomery. His marriage to Montgomery ended amid rumors of domestic violence. Nine months after his divorce from Montgomery, he married fourth wife Elaine Williams. Williams gave birth to Young’s only child, a daughter Jennifer, in 1964. Young proclaimed this a miracle, as he had undergone a vasectomy at age 25. However, after his divorce from Williams, Young publicly denied Jennifer as being his biological child.

In 1969, Young portrayed seedy dancehall host Rocky in Sidney Pollack’s They Shoot Horses, Don’t They? The character of Rocky was an acting tour-de-force for Young and netted him an Oscar, his life-long dream. Unfortunately, that win, coupled with his growing alcoholism, was the beginning of the end of Young’s career. He was fired from the role of the Waco Kid in Blazing Saddles because his excessive drinking caused him to suffer delirium tremens on the set. He lost the role of the voice of Charlie Townsend in Charlie’s Angels because he was too drunk to record dialogue. In the 1976 television film Sherlock Holmes in New York, Young’s drinking problem is visible on screen, as he steps on the cues of other actors in trying to get his lines out and appears to be in a fog.

In 1978, Young met script supervisor Kim Schmidt on the set of his final film, Game of Death with Bruce Lee. The two were married, although Schmidt was thirty years Young’s junior. Three weeks after their marriage, the couple was found dead in their Manhattan apartment. Young had shot Schmidt and then turned the gun on himself. Police found Young’s Oscar beside the bodies. It was later discovered that Young had been receiving experimental LSD from the controversial psychologist Dr. Eugene Landy, who was later professionally decertified for his controlling treatment of Beach Boy Brian Wilson.

Young’s will left his Academy Award to his agent, Martin Baum. Young left ten dollars to his daughter Jennifer.