My wife (who I’ll call “Mrs. Pincus”) and I have had a running joke for 27 years. We met in February 1982 and had our first date soon after. Our conversation was always great. We found that we had so many common interests. The joke was that we would never ask each other: “So, what kind of music do you like?” We figured that when we got to that question, we had run out of things to talk about. We still joke about it, even after twenty-five years of marriage. But, the truth is — I know. We both know. We both know the unspoken secret.

I married a Dead Head. 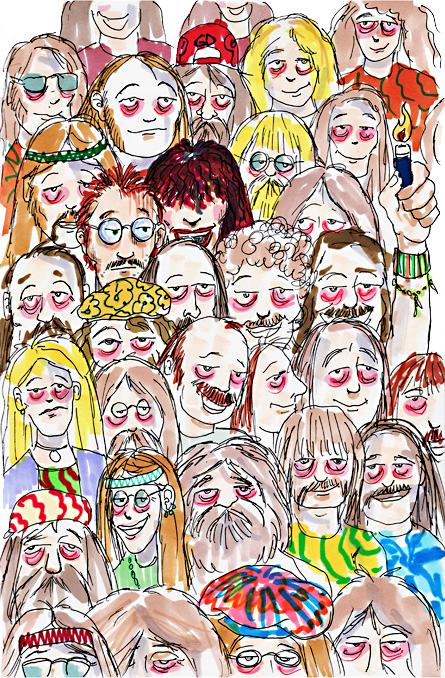 I have been a music enthusiast from an early age. I listened to bubble-gum pop songs on AM radio, eventually making the change to cooler FM. I started going to concerts when I was 14. And, of course, I bought 45 singles and LP records (Those are the flat, shiny black vinyl things with a hole in the center for those of you under 30). I was a casual fan of many bands  The Beatles, Pink Floyd, Jethro Tull, Fleetwood Mac, Queen — and I had several albums by each one. I had two Grateful Dead albums — “From The Mars Hotel” and the live recording “Steal Your Face,” — which I bought as “cut-outs” from Peaches Records. These were out-of-print remnants from a record label’s catalog, so named for the physically clipped corner of the record’s sleeve. Cut-outs were the music equivalent of that odd-sized bolt of puke-green colored shag carpeting at the back of the flooring store. I was familiar with The Grateful Dead from a late-night showing of “The Grateful Dead Movie” on television. I’m sure I did not watch the whole film, but I liked some of the songs. I saw these albums in the “cut-out” section for $4.00, so, what the hell, I bought them.

I heard stories about Grateful Dead concerts from two older and cooler cousins. They related tales of cross-country travels to see The Dead, sleeping in VW Beetles and VW minivans (Dead Heads seem to gravitate towards Volkswagen products). They told of four-hour marathon performances featuring long and meandering full-band jams, known as the “space” portion of the show.

After dating for a month or so, the future Mrs. Pincus nonchalantly took me to a Dead show in early ’82. We were accompanied by her then-thirteen year old brother. We planned to meet her older brother at the Philadelphia Spectrum, where the show was presented. Once at the Spectrum, we mingled with the throng of dirty, tie-dye decorated denizens from another time in history. The Spectrum’s parking lot was a mini Woodstock-like carnival of psychedelia, stir-fried cabbage, macrame handbags and poorly-printed T-shirts adorned with skeletal images. There was a guy, with a beard that looked like a bird’s nest, selling brightly-colored balloonfuls of nitrous oxide for a buck. Inside the venue, I watched in bewilderment as the band played for hours (what sounded like the same song) much to the wild delight of the pirouetting kaleidoscopic faithful. Unknown to me at the time, this was to be my first of many Grateful Dead rituals.

Their regular schedule brought the Dead to Philadelphia for several consecutive nights each tour. Mrs. Pincus and a friend went to the show the night after my first experience. After work, I arrived at Mrs. Pincus’ apartment after they had left for that evening’s spectacle. From the empty glasses in the sink, I figured they must have had a few belts before leaving. I flicked on the TV and prepared for a long night of waiting for them to return. After a few minutes I noticed the cat (“Cassidy” was her name, the first in a long line of Grateful Dead-named cats we would have) wasn’t around. I searched under the bed, in closets, behind furniture, but the cat was nowhere to be found. Five hours later, when the totally-rocked pair of concert-goers returned, I asked when was the last time they saw Cassidy. They sobered right up and the three of us ripped that dwelling apart looking for the cat. Retracing her steps, the future Mrs. P opened the refrigerator and a cold but frisky Cassidy bounded out. She had snuck onto a bottom shelf when Mrs. P was dispensing alcohol and looking elsewhere. (Not to worry, Cassidy lived another eleven or so years easily.)

Several years later we even traveled to the Brendan Byrne Arena (now the Izod Center) in North Jersey to see The Dead. We sat in seats that were mathematically as far from the stage as one could get. Late in the show, after two and a half hours of essentially the same song, a wave of crowd recognition ebbed to the higher reaches of the arena. Through binoculars, I spied two fat dots on the smoky yet vibrantly-lit stage. One was obviously Jerry Garcia, spiritual deity of Dead Heads worldwide. The other plump speck, we discovered by way of “whisper down the lane”, was Stephen Stills, who was joining the Dead for the evening’s encore. As the band lumbered through a version of “Love The One You’re With,” I had to check my calendar to see what year this was.

In the early 90’s, my wife’s politically-affiliated cousin Carol offered us tickets to a fundraiser for U.S. Representative Pete Kostmayer. Carol didn’t have a lot of details on the event, but it was our understanding that this was a serious, political, adult benefit. That meant “tie and jacket” for me. The highlight (and presumably the draw) of the benefit was a performance by the Grateful Dead’s Bob Weir. The event was held at the now-defunct The Barn in Bensalem, a bar that served cheap beer, as well as playing host to a plethora of local cover bands. Mrs. Pincus and I dressed in our conservative best. Upon our arrival at The Barn, we realized our miscalculation in attire, as we were greeted by a knot of spinning, patchouli-stinking, tie-dye draped Bohemians, some of whom I’m sure I recognized from the Spectrum’s parking lot years earlier. Swirled Whale, a local band of Grateful Dead wannabes, entertained the crowd prior to Bob Weir’s arrival. Bob, however, was running late. Very late. Very, very late. Swirled Whale, whose lead singer mugged and contorted snake-like around the microphone stand — convinced everyone was there to see him — played for an hour and a half. This is twice the time allotment for a typical opening act. Bob finally sprinted to the stage, acoustic guitar in hand. He stumbled over Pete Kostmayer’s name, raced through three songs, thanked the audience and split. He may have even been checking a train schedule as he departed the stage. His entire presence took up twenty-five minutes… and that is being generous.

My wife and I attended another Dead show at the Spectrum at which, during an extended drums>space>drums jam, the entire section next to us was asleep. I can guarantee that, when they got home, those fans told their friends they saw the best show EVER! The next night, my wife was too sick to attend, so I took her ticket and went to the show with my brother-in-law. Arriving at our section, we began to count off row and seat numbers according to our tickets. Finger pointing in the air, I ticked off “nine, ten, eleven, twelve”. We had seats eleven and twelve. Eleven was empty, however wedged into seat twelve was a giant, tattoo-covered, leather-vested, chrome-chain bedecked biker dude. I turned to my brother-in-law and said, “Uh, he’s in your seat. Mine’s the empty one.” Unfettered and with a “fuck that!” expression across his face, he marched down to the seats, ready for confrontation. “Excuse me,” he started, “I think you’re in my seat.” The biker turned and spoke. “Oh, I’m sorry.,” he said, apologetically, “My mistake.” He extracted his girth from the seat and scurried up the aisle. My brother-in-law turned back to me proudly, as if he had just slew Goliath.

Over the years, I have experienced a Dead Head’s life as an outside observer. Once while driving alone on twisty, almost unnavigable Lincoln Drive in my wife’s Dead sticker-clad Datsun, a long-haired, shirtless teen with a crooked grin, in an equally Dead sticker-covered auto, jockeyed alongside my car, leaned out his car window and screamed “Iko Iko” at me at the top of his lungs. For Dead Heads, the band and its music are always  top of mind. Always. At least that’s what other Dead Heads think.

Late in the summer of 1995, my wife and my son had taken several days vacation in Atlantic City, New Jersey. I was at work. During the day, I was informed there was a phone call for me. I picked of one of the extensions. It was my wife and she was crying. I immediately thought the worst. My wife! My son! “What’s the matter?,” I asked.

Through tears and sobbing, she replied, “Jerry died.”

“Oh my God! Your cousin Jerry died?,” I answered, a chill running down my spine. My wife’s cousin Jerry is a healthy, athletic, energetic man in his early thirties.

The true spirit and spontaneity of The Grateful Dead phenomenon is gone. Although the surviving members are touring as a band called “The Dead,” it seems forced and planned and plastic.

Even to an outsider.