The challenge this week on Monday Artday is “music group”. 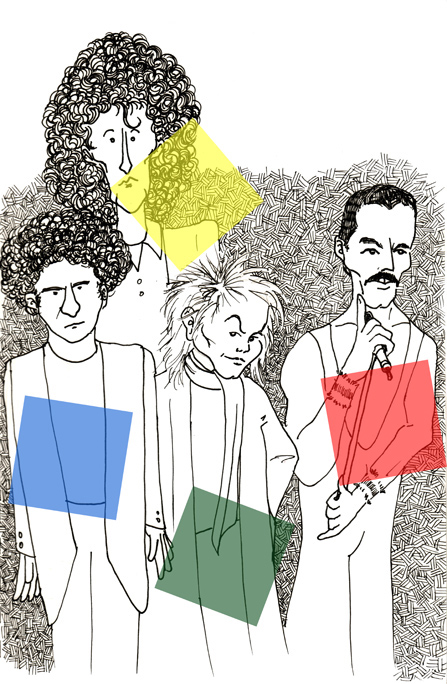 I remember it well. It was late one night in 1974. I was in the bedroom I shared with my brother. As usual, his clock radio was tuned to WFIL-AM. Typical for a top 40 AM radio station in 1974, the air was filled with the likes of Helen Reddy, Barry White, The Carpenters and Barry Manilow. There were the one-hit wonders of the day, like “Life is a Rock (But The Radio Rolled Me)” and “Kung Fu Fighting”. But this particular night stands out in my mind. It was on this night I heard a song cut through all of the other songs. It sounded like nothing else I had ever heard. There were musical sounds and vocal arrangements unlike anything else being played on the radio. I dropped the Mad Magazine I was reading and was mesmerized. At the song’s conclusion, the DJ announced (most likely while the fade-out was still playing, as was the custom of AM disc jockeys) the song title and performer. It was “Killer Queen” by a band called Queen. The next day in eighth grade, I asked some classmates if anyone had heard this song. No one did. For a few days, I thought maybe I had dreamed up this song. Finally, in my math class, Ellen Weinraub said she heard the song. I never liked Ellen very much, but at least now I knew I wasn’t crazy.

Then, I heard it again. It was incredible. There were words I heard that I had no idea what they meant. What was “Moet et Chandon”? What was “gelatine”? And where on earth was “Geisha Minah”?

This was just the beginning. Queen’s “Sheer Heart Attack” joined my collection of vinyl LPs. It stood out like a sore thumb among Carole King’s “Tapestry” and “Rufusized” by Rufus. After owning “Sheer Heart Attack” for a week, I knew every word to every song. I could sing along in perfect sync with my new hero, Freddie Mercury.

In December 1975, I was browsing the selection at Sam Goody in Neshaminy Mall. I spotted what would become my purchase for the day. It was a new recording by that band Queen called “A Night at the Opera”. I purchased my copy on eight-track tape. When I got home, I popped it into my Panasonic Dynamite 8. Again, this sounded like no other album in my collection. And when my player clicked to “Bohemian Rhapsody”, I thought my head would explode.

On New Year’s Day 1977, I begged my father to take me to buy the newest Queen album, “A Day at the Races”. I had to get it before Hal Feldbaum did. Hal was my friend, but rival for all things Queen. Through a heavy snowfall, my dad drove me to Korvette’s and the album was mine.

My Queen experience was about to move to the next plateau. I had been to several concerts by 1977. I saw Alice Cooper in ’74 and America right after that (The old “one-two” musical punch). I read in the paper and heard on the radio that the Philadelphia Civic Center was a stop on Queen’s US Tour. (Unknown to me, they had played at Philadelphia’s Erlanger Theatre several years earlier.) I bought tickets and secured a ride. I was as good as in. The big night came. My mom drove Hal and me to the venue. We filed in and figured the balcony would offer the best view. We found two seats in the front row of the balcony and watched Thin Lizzy open the show. Soon, Queen took the stage. There were lights and costume changes and soaring guitars and the theatrics of Freddie Mercury. The crowd was in the palms of their hands. After the show, I bought a Queen t-shirt from a guy in the parking lot. When I got home, I noticed that the imprint was halfway between the front of the shirt and just under the right sleeve. But, it was only five bucks.

When “News of the World’ was released, Queen once again hit their mark. The double-A side single of “We Will Rock You” and “We are the Champions” was an instant international hit. When the tour dates were announced, my brother slept out all night for concert tickets. He got tickets for his friends, himself and me for Queen’s Philadelphia Spectrum show in November 1978. I was a bit upset when my brother gave me the fourth row seats and kept the front row seats for himself, until we arrived at the show and saw that his seats were facing a bank of twelve-foot speakers. Sure, Brian May talked to him during the show, but damned if he could hear what Brain was saying. Plus, from my fourth row vantage point, I was able to catch one of the three dozen carnations that Freddie threw into the crowd during the encore.

As the years went on, I loyally purchased every one of Queen’s albums on their release day. I even bought “Jazz” at midnight at Peaches Records. Nothing would stand in my way of seeing a Queen concert. I had missed a week of school with pneumonia, but I still when I went to see Queen on their Jazz Tour. Still sick.

But, something happened as the years went on. I don’t know if it happened to Queen or to me. Queen’s albums were still good, but not great. Sure, I bought them, but I found myself playing the earlier ones more and listening to the newer ones less. In 1982, I met the girl who would become my wife. She was a tie-dyed-in-the-wool Dead Head. In ’82, I took my mom (a Queen fan) and my girlfriend (um, not a Queen fan) to see the local stop on Queen’s “Hot Space” Tour. This was my mom’s first concert and she cried when Queen took the stage. I believed my girlfriend was going to cry too, but for a different reason. She asked why they keep changing costumes. “Is it to hide their lack of talent?”, she inquired. I thought about Jerry Garcia’s usual stage garb. I didn’t answer her question.

Queen stopped touring in the United States after 1982. They continued to release albums, but they included sub-par compositions that sounded tired and bland. Freddie Mercury passed away in November 1991 at the age of 45. He died twelve hours after announcing to the press that he had AIDS. Queen and I parted ways.

Two years ago, guitarist Brian May and drummer Roger Taylor teamed with Bad Company’s Paul Rodgers to form a band called Queen. I saw them on MTV. They sound like a bad Queen cover band. They are not, nor will they ever be, Queen.

Freddie Mercury must be pirouetting in his grave.