The challenge this week on Monday Artday is music group. This is the second of two illustrations for this topic. 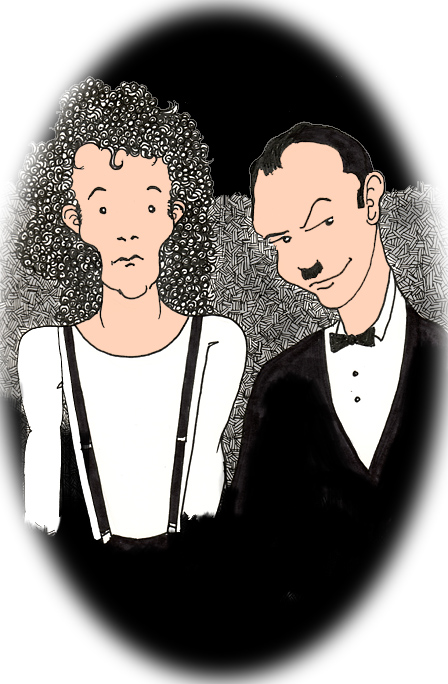 Keyboard wiz Ron Mael and his younger brother, vocalist Russell formed Sparks (originally named “Halfnelson”) in Los Angeles in late 1969. Self-proclaimed Anglophiles, the brothers moved to England, assembled a backing band of local musicians and released “A Woofer In Tweeter’s Clothing”.They toured the United Kingdom and released their breakthrough follow-up album “Kimono My House”in 1974. That album gave Sparks a Number 2 single in the UK with “This Town Ain’t Big Enough for Both of Us” (covered by British “Flavor-of-the-Month” The Darkness’ singer Justin Hawkins in August 2005). Sparks’ cult-status success continued with one genre-defying album after another. Sparks appeared in the 1977 Sensurround film “Rollercoaster“, after Kiss turned the role down. (The Mael brothers later said that their appearance in that film was the biggest regret of their career.)

Their style jumped from rock to glam to pop to euro-pop to electronic to new wave. In 1983, they broke onto the US singles chart with “Cool Places,”a collaboration with the Go-Go’s Jane Wiedlin. Jane had run her own Sparks Fan Club as a teenager.

Known for their “off-the-wall” ventures, Sparks released “Plagiarism”, an album of covers of their own songs with guest vocalists.

2002 saw the release of their opus “Lil Beethoven”, featuring classical arrangements of strings and choirs. Record Collector Magazine named the album as one of its “Best New Albums of 2002”, describing it as “possibly the most exciting and interesting release ever from such a long established act”. Sparks appeared in the season 6 finale of the show Gilmore Girls, performing “Perfume” from the follow-up to “Lil Beethoven”, “Hello Young Lovers”.

In May and June 2008, the always-ambitious Maels brought the 21-night “Sparks Spectacular” in London, where the band performed each of their albums in chronological order during the first twenty nights, and premiered their new album, “Exotic Creatures of the Deep”, on the twenty-first concert on June 13th. Each night, they performed an album in its entirety followed by a rare track. Many of the songs had never been performed live before.

Sparks’ musical philosophy has always been to observe current trends in music and then head in the opposite direction. They’ve been doing it for almost forty years.

And you haven’t heard of them? You have a lot of catching up to do.