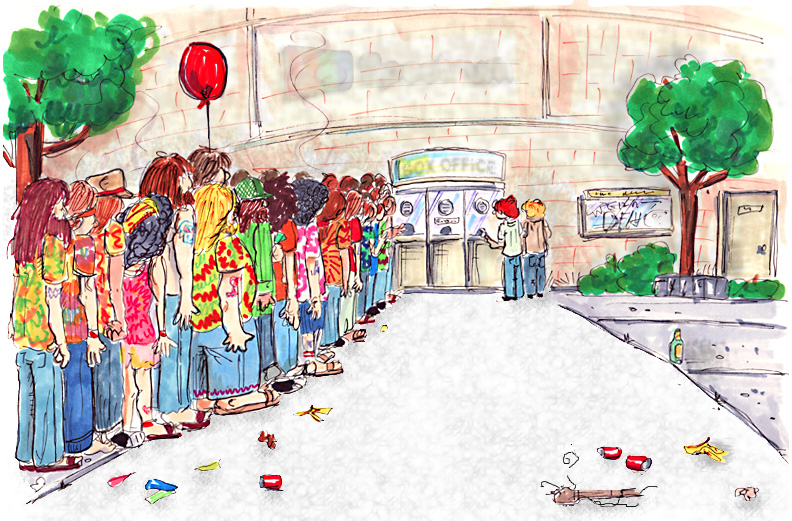 In the long-ago days when a band called Led Zeppelin still existed, when the mention of  The Rolling Stones entering a recording studio did not evoke an exasperated “eye roll” and Cat Stevens was singing about the joys of moonshadows instead of Jihad, a local stop on your favorite band’s concert tour came with the perennial regularity of Daylight Savings Time, the swallows triumphant return to Capistrano and a visit from Saint Nick. The unwritten agenda the majority of popular rock groups followed was to release an album and embark on a national publicity tour. Bands maintained that schedule until a founding member resigned or adoration waned. Before the ubiquity of the Internet, obtaining tickets to said concert was a grueling task. Today, a few clicks of the mouse or taps on your iPhone will effortlessly yield a pair of front-row seats. Back then, the quest for concert tickets was a rite of passage.

From the time I discovered Queen in 1974, you could set your watch by their annual itinerary. Like the larger part of their contemporaries, Queen would release an album and follow it with a multi-city (or possibly multi-country) tour. When I first saw Queen live, in support of their 1976 effort A Day at the Races,  admission tickets, purchased from the Ticketron service at neighborhood sporting goods store, banished us to the upper level of the Philadelphia Civic Center.

Along with other counter-culture innovations, the 1960s introduced a ticket-purchasing phenomenon known as “sleeping out.” Tickets for an announced show would be available for purchase on a particular morning at 9 o’clock. Wiley fans would arrive at the venue the night before and sleep in their cars all night guaranteeing a choice spot in the queue when the box office displayed its “Open for Business” sign at sun-up. As the 1970s rolled around and “sleeping out” was hitting its hey-day, fans, anxious to get a jump on their compatriots, would appear earlier and earlier. Usually the first person to show up in the evening would become the unofficial list-keeper. The main responsibility of this unelected position was to compile and maintain a list of the subsequent ticket hopefuls in the order of their arrival. As the group of interested patrons increased, their names would be added to the list and, in the cases of a particularly desirable concert, roll calls at regular intervals throughout the night would be enacted. Sometimes, a band’s fanbase was – shall we say – less patient and orderly.  Sometimes, the existence of several, conflicting lists would cause heated disagreements as to which was the true “unofficial” official list. The venue itself steered clear of the melee and let the crowd duke it out on their own. After all, they were only selling  tickets and they didn’t care who they were selling them to.

In 1978, my older brother offered to purchase my tickets to Queen’s upcoming News of the World Tour, as he and a friend were going to “sleep out” at the Spectrum, the now-defunct and demolished, premier concert facility in Philadelphia. He returned home the following afternoon with a pair of tickets for me in the center section fourth row. I was ecstatic, until I saw that he kept the first row seats for himself. (I was back to “ecstatic” when, the night of the concert, his seats butt up against a twelve-foot tall bank of speakers.)

The following year, Queen toured in support of their seventh release Jazz and, just like clockwork, the announced Philadelphia date was the approximate anniversary of the previous years’ show. Rather than relying on someone else’s efforts to secure tickets, I decided to take matters into my own hands.  I knew that Queen did not command the same level of popularity among my peer group as other bands, so the competition for excellent seats would be minimal. Since the majority of local fans would patronize the local Ticketron outlet (the closest one located in the Gold Medal Sporting Goods store near George Washington high school), it would be to my advantage to “sleep out” at the Spectrum. I proposed the plan to Danny Silverberg,* a fellow Queen fan and the only one of my friends with his own car. He was all in. He’d pick me up Friday evening at 11 PM and we’d sleep in his car in the Spectrum’s parking lot to wake up first in line Saturday morning and nab seats within spitting distance of Freddie Mercury (that was actually better than it sounds!)

Danny’s car horn honked outside my house at the designated hour and, grabbing a few sodas and a bag or two of chips, I ran out the door and into his awaiting front seat. We sped down I-95, pleased and contented by our ingenious scheme to outsmart every Queen fan at Washington High School. It was smooth sailing as Danny navigated his Datsun down the Packer Avenue off-ramp and turned onto Pattison Avenue, now desolate under the orange glow of the streetlamps. The Spectrum stood just a few blocks away, quietly looming in the darkness, the curve of its roof blending into the near-midnight sky. Danny hung a left into the parking lot…. and screeched to a halt.

The lot was packed with cars and vans and campers. It was alive with dancing and music and the unmistakable reek of patchouli. A group of people possessed by a sort-of tribal energy swayed and twirled around a raging bonfire at one end of the lot. Another cluster of folks congregated beside a brightly painted former delivery truck where several inhabitants were dishing out translucent shreds of cabbage wrapped in tortillas in exchange for a few coins. Still another collective had formed an impromptu jam session, some strumming out-of-tune guitars while others slapped their bare thighs and chests in percussive accompaniment. Every vehicle was plastered with stickers displaying skeletons and roses, lightning bolts and colorful bears. Several shirtless individuals wandered aimlessly in circles. Others slept under the landscaped trees that dotted the parking area.

Danny rolled his car into one of just a handful of unoccupied spaces and we slowly got out, baffled by the spectacle playing out around us. Suddenly, a voice cut through the incessant din of guttural yelps and plucked guitar strings. “Roll call!” screamed the voice. The lion’s share of the crowd shuffled off and formed a semi-circular wall of humanity around a long-haired, dirty young man standing on the rusted hood of a beat-up car of indiscriminate make and model. Caught in the onslaught of the troupe, I asked one of the stragglers, “Hey, what’s going on?”

“Dead tickets, man!” was the answer I received from the tie-dye wrapped, barefoot object of my query. It seemed that tickets for the Grateful Dead’s upcoming show were going on sale the same morning as tickets for Queen. Danny and I were at Ground Zero of the mother of all “sleeping out” events, since it was practically invented by Dead Heads.

We didn’t bother adding our names to a list, since we weren’t going to be purchasing Grateful Dead tickets. But, we assessed our situation and, as they say, “when in Rome.” Danny and I mingled through the crowd laughing and shaking hands and joining in the sing-alongs of the few Dead songs we knew. We gratefully declined the many offers of food from our new friends, remembering the horror stories depicted in fifth-grade films about “hippies putting heroin in candy bars” and “drug pushers forcing LSD-laced stickers on unsuspecting children.” Danny even borrowed a guitar from one fellow, but his musical selection was met with frowns when he plunked out a pizzicato version of The Who’s “Behind Blue Eyes” on the pot-leaf emblazoned instrument. For the rest of the night, we wandered in and out of the makeshift circus that filled the otherwise unassuming Spectrum parking lot. We got no sleep and we had a blast.

When the black sky gave way to streaks of orange and yellow sunlight, the masses assembled for a final roll call and to claim their spot in the queue. Danny and I gravitated towards a second ticket window. We were accosted by several suspicious Dead Heads leery of our possible attempt to buck the line. We had to explain multiple times that we were not buying Dead tickets. We were buying Queen  tickets. Our affirmation was at best satisfactory, however we were still on the receiving end of a ton of dirty looks as we approached the other ticket booth. The time spent pleading our case and protesting any wrong-doing cut into our window of opportunity, cooling our plan to “strike while the iron was hot.” We managed to score seats in the seventeenth row for the concert, but we had a once-in-a-lifetime experience for which one couldn’t buy a ticket — an experience that has since been totally eliminated by the Internet.

Footnote: By the time the date of the Queen show finally arrived, I had contracted a horrible case of pneumonia. Sick as a dog, I went to the concert anyway.

*not his real name.