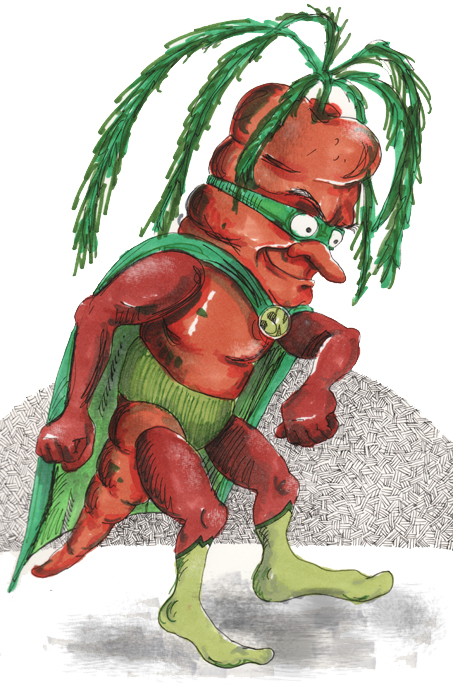 In 1982, I was in my second year of art school. When I began my first year at The Hussian School of Art, Jimmy Carter was president and he was very generous with government money for education (if you can call “art school” education). When Ronald “There’s a Commie under my bed” Reagan became president, dollars that once went to education programs were now earmarked for bombs to keep us free from those dirty Ruskies! To pay for school, I worked three evenings a week at my cousin’s health food restaurant, Super Natural. Super Natural served veggie burgers and fresh salads and eggplant Parmesan and vegetable stir-fry and tempeh sandwiches and all sorts of organic and healthy shit. My cousin commissioned a local artist to create a mascot for the restaurant. He delivered Carrot Man, a super-vegetable who fought against fast food. (I actually redesigned Carrot Man several months later for a new in-store menu.)

Every Wednesday, Thursday and Friday, I would walk (actually I’d run to make it in time for my designated 3 o’clock start) from 13th and Arch in center city Philadelphia to 16th and Spring Garden, just on the outskirts of North Philadelphia.

Super Natural was a cafeteria-style eatery that did a brisk lunch business. It was directly across the street from the Philadelphia headquarters of Smith Kline (now GlaxoSmithKline). Soon, Community College of Philadelphia opened in the 1700 block of Spring Garden Street, in the long-vacant former site of the Philadelphia Mint. (Incidentally, this building also served as Philadelphia Police headquarters in the 1983 film Trading Places.) Because the crowds were so big at lunchtime, my cousin Ron decided to open for dinner three nights a week. Unfortunately, Smith Kline employees and Community College students wouldn’t be caught dead in North Philly after 5 o’clock…lest they be caught dead. Needless to say, dinner business was light.

I worked behind the counter, making salads, stuffing pita bread, dishing out portions of tofu lasagna and grinding fruits and vegetables into fresh juice. Despite fitting the profile with my beard and ponytail, I was not a follower of the health food lifestyle. During the day, I ate hot dogs from street vendors or bacon double cheeseburgers and fries from Burger King. And no weekend was complete without a cheesesteak from Jim’s on South Street or a hoagie from Lee’s.

Super Natural’s closing time was 10 PM on Fridays and my co-worker Tony (whose name was really Gary… who knows?) and I were anxious to leave as soon as the last casserole pan was washed and the last mop string cleaned the last floor tile. Around 9 o’clock on this particular Friday, a party of three — two girls and a guy — entered the restaurant. I was not too happy, as I had to greet, serve and get this crew out in under an hour. One of the girls approached the counter. I thought she was pretty, but I was more concerned with moving them along — out of the restaurant and out of my life. She asked about the various dinner offerings on display. She pointed to a container of shredded cheese in the salad section and asked, “Does the cheese have rennet?” I replied with five words. Five words that obviously melted her heart and won me her eternal affection. Five magical words. I said “What the hell is rennet?

“Rennet,” she explained, “is used in making cheese. It is usually from an animal source. I keep kosher and if your restaurant is truly and strictly vegetarian, I was wondering if the cheese has a vegetable-derivative rennet.” She smiled.

I looked back at her with an annoyed and confused expression and said, “Kosher? I don’t know anyone under the age of 80 that keeps kosher. My grandmother keeps kosher, for Christ sakes!” I looked at the clock. “This is taking too long,” I thought. The other girl approached the counter. She was cute. I thought I would attempt to charm her phone number out of her, so this night wouldn’t be a total loss. The three made their selections and sat down at a table to eat.

Already behind in my usual closing-time schedule, I began to close up the steamtable, clean the wok and wipe down the other tabletops. Tony (or Gary or….whoever) was in the second-floor kitchen, washing the evening’s dirty casserole pans. As I wiped the other tables close to the lone diners, I tried to make friendly conversation. I suppose I thought it was my duty. I gathered all the charm I could (for a Friday at 9:45 PM). I introduced myself and I asked their names. The guy muttered something I really wasn’t interested in. The first girl — the pretty rennet-questioner — told me her name and asked me if I had an older and taller friend. The other girl introduced herself. Midway through her name I asked for her phone number….several times…. which she refused to give. So I scribbled on a piece of paper and forced my number on her. Girl Number One, however, gave me her number for my older and taller friend. She also told me that I was one of the most obnoxious people she had ever met. Finally they finished their meal and left to go to the movies, a midnight showing of Grease.

I called Girl Number One the next day, to tell her to expect a call from my older and taller friend. On the phone she was funny and sweet and adorable and there was no way I was giving her number to anyone. We talked for almost three hours and I asked her out myself.

We were engaged nine months later. This July, we celebrate our twenty-fourth wedding anniversary.

Curiously, I have happily kept kosher for twenty-four years and I decided to become a vegetarian almost three years ago.