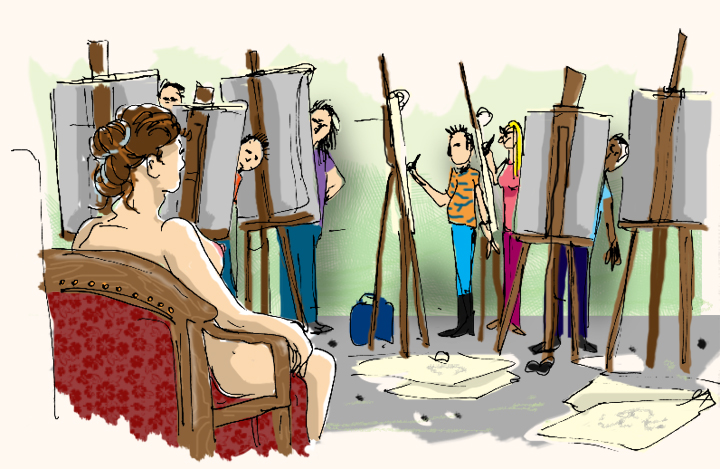 When I graduated from high school, I didn’t know what the hell I wanted to do with my life. I was working as a cashier at the women’s clothing store that my mother managed. I was planning on a career in the retail business, perhaps one day working my way up to manager myself. But, I hated the retail business and, after a year, I was ready for something else.

I had been drawing since I was a little kid, doodling little cartoons on any spare piece of paper I could get my hands on. I decided to look into enrolling in art school, to hone and refine my natural ability and possibly make a career of it… much to the consternation of my father. My father was a butcher. He had no concept of making a living with something as intangible as — gulp! — art! So, it was understood that if I wished to embark on this frivolous notion of making a living at being an artist, I would have to finance the education portion myself.

I got myself an interview at the Hussian School of Art, a respected establishment known throughout the small, commercial art trade in Philadelphia. I was given a brief tour of the facility — a small, cramped, loft-like area occupying three non-consecutive floors of a dilapidated building in one of the seedier sections of center city Philadelphia, situated between a multi-level adult bookstore and a homeless shelter. Afterwards,  I presented my thrown-together portfolio to Ron Dove, the president of the school. Although Mr. Dove perused my offerings (comprised mostly of projects from high school art classes) with nary a change in expression, I was accepted and welcomed to be a part of the freshman class beginning in the Fall of 1980.

The summer preceding my entrance into art school, I spent a week in Florida with some high school friends in one last fling of youth. I was about to enter the next stage of my life, a path towards responsibility and career goals and adulthood… as I tried to convince my parents and myself.

My first class of my first day of art school was “Graphics,” a sort of catch-all that would introduce printmaking through linoleum and woodcuts, metal etchings, silk-screening and other skills I would never, ever use. I sat at a long table, listening to a long-winded speech from the teacher, matronly Mrs. Spiro, when a guy (later I would know to be “John”) seated across from me asked if I knew the time. I glanced at my watch and answered. That was the first of many friendships I would make at Hussian, kindred spirits all with the same eventual goal.

My next class was “Drawing.” Now, we were talking. I could draw like nobody’s business. I placed my required newsprint pad on one of the many easels strewn haphazardly along the perimeter of the open studio. I selected a few slender sticks of charcoal from a box I had purchased as part of a list of mandatory supplies (including a forty dollar box of pastels that I don’t think I ever cracked the cellophane on). The teacher, a fierce little martinet named Mrs. Clement, arranged a bowl with fruit and flowers on a lacy tablecloth at the center of the room. The class collectively began to interpret the setting in charcoal. Mrs. Clement offered the harshest of criticism as she paraded around the room, weaving in and out of easels, careful not to leave any budding artist without at least one insult and proper discouragement. “Holy shit,” I thought, as Mrs. C. gleefully pointed out my artistic shortcomings, “is this what I signed up for?”

As the semester progressed and we began to fully understand the nature and actual encouraging powers of critique, the drawing class was introduced to the next phase of subject matter. On this day, we arrived for class as usual, setting out our materials and securing a place with a good view of the small riser at the room’s center. Only this time, there was no table, no bowl, no fruit and no lacy tablecloth. Mrs. Clement, instead, silently escorted a tall woman in a bathrobe to the riser. The woman was about the same age as the majority of my classmates. She wore her mousy brown hair pulled up in a loose bun at the top of her head, tied with a small piece of ribbon. With no warning, she dropped her robe and we saw that the ribbon was the only thing on her body she wasn’t born with. A few stifled coughs split the otherwise silent studio. The woman, expressionless, raised her arms above her head and intertwined her hands with her palms to the ceiling. She arched her back and extended one long leg behind her, elegantly pointing her toes. The class stood motionless. This was quite unexpected and quite a change from a bowl of fruit.

“She’ll be changing poses every three minutes,” Mrs. Clement barked, “so get drawing!”

Drawing? Oh, right! That’s why I was here.

We tried to remain as mature and adult as we possibly could, but for goodness sakes!, this woman was standing before us in all her nipples-and-pubic-hair glory, without blushing or batting an eye. Needless to say, there was a reasonable amount of squirming. True to our teacher’s word, she did, indeed, change poses every three minutes to the point where there wasn’t a square inch of that young lady’s body that we didn’t see and, eventually, draw. At one point, she seated herself in a ratty old chair and posed in some of the most immodest positions imaginable. (Didn’t your mother ever tell you “A lady crosses her legs at the ankles when seated.” Obviously, this woman had skipped finishing school.) Finally, we broke for lunch. The model put on her robe and walked to a small dressing (undressing?) room at the rear of the studio. Sue, one of my classmates, turned to me as she gathered up some of  her supplies and said “She’s very graceful, isn’t she?” I replied with a nervous, cockeyed smile… as though I had just been caught with a naked woman.

But, guess what? The naked female body is very difficult to draw, especially for someone like me, who is more comfortable doodling silly cartoon characters. As the time went on, naked women or not, I dreaded that class. Mrs. Clement was a tough and demanding instructor and the realistic drawing style that was expected of me proved very challenging. I equated it with another scenario in my life.

During the time I attended art school, I worked in the buffet room of a dinner theater. Prior to the evening’s performance, patrons would line up to fill their plates and stuff their faces with a wide array of food. Salads, vegetables, casseroles and roast beef — which was carved by yours truly. When dinner time concluded, we closed off the buffet room and began the task of cleaning up. Workers in the buffet were permitted to take as much of the leftover food before returning it to the kitchen. When I first got the job, it was a benefit to end all benefits! I piled a plate to overflowing capacity, as though I was a condemned man offered his last meal. And I did this every night. For a week. Until the novelty wore off and I never wanted to see or eat that shit again.

That’s how I came to feel about the nude models. What started out as “Oh my God!” soon became “Ugh! Not again!?”