I research a lot. I am always scouring the far reaches of the internet for interesting stories to illustrate. Several weeks ago I came across the story of Jimmy Boyd. 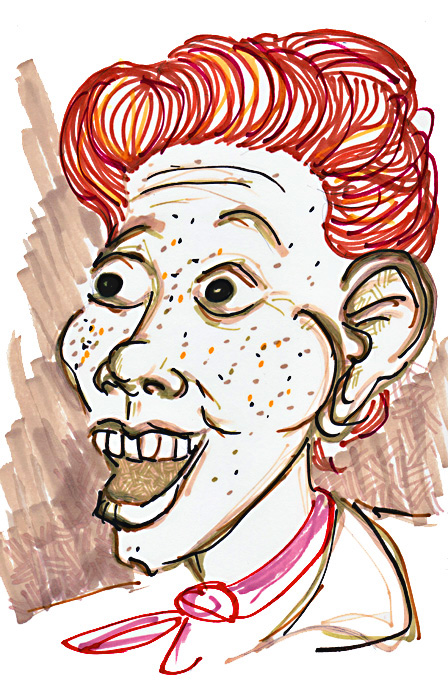 In 1946, seven-year-old Jimmy Boyd was singing with his brother at a barn dance in Colton, California. He was approached by a local radio host with an offer to perform on his show every Saturday night. Jimmy would earn $50 per show, money that would help to pay for cataract surgery for his mother.
The radio performances led to an audition for the Al Jarvis Talent Show in Los Angeles. Jimmy was a hit and was recruited for Jarvis’ five-hour daily show. Jimmy became a regular on the show. His popularity grew until he was performing on The Frank Sinatra Show with Ol’ Blue Eyes himself.
The accolades kept coming as 13-year-old Jimmy recorded the novelty hit “I Saw Mommy Kissing Santa Claus”, a holiday favorite that sold two and a half million copies in its first week of release. Jimmy became an international household name, and he skyrocketed to the status of a major star. Between February 1953 and November 1954, Jimmy made five appearances on the Ed Sullivan Show. Popular singer Giselle MacKenzie was bumped from one of those shows in order to accommodate Jimmy’s performance. Jimmy appeared on many popular variety shows of the day and recorded several more hits with Frankie Laine and Rosemary Clooney.
Jimmy had a great professional relationship with 60’s sing-along icon Mitch Miller. Miller was also an A&R (Artists and Repertoire) man at Columbia Records. He signed Jimmy to a contract and supplied him with a stream of novelty songs to sing. Jimmy disliked the songs but felt a loyalty to Miller. Jimmy longed to sing rock and roll  a music style that Miller publicly hated. Miller presented Jimmy with another novelty tune  “Jambalaya”  to record. Jimmy turned him down, deciding instead to concentrate on pursuing an acting career.
Jimmy’s success still wouldn’t let up. In the 1960s, he had hits with songs written by the likes of Leon Russell, Bobby Darin and Barry Gibb and produced by studio wizards like Terry Melcher. He was personally signed to A&M Records by founder Herb Alpert.
Jimmy conquered acting with guest roles in an array of popular TV programs and a part in “Inherit The Wind” with Spencer Tracy.
Jimmy was the youngest entertainer ever to appear in Las Vegas, starring at the famed Sands Hotel’s “Copa Room” at age thirteen during the swinging “Rat Pack” era. On Jimmy’s opening night, he was cheered to return to the stage for multiple encores. With the audience still applauding, Sands’ boss, Jack Entratter, standing backstage, angrily caught Jimmy and stopped him from going back on stage after his third encore, explaining that the audience needed to get back to the casino. Jimmy toured, selling out 90,000 seat venues. Jimmy was singing and doing TV and movies simultaneously.
In 1960, Jimmy married actress/dancer Yvonne Craig (who went on to become TV’s Batgirl). He entered military service in 1961. His marriage to Craig ended in divorce after two years. Jimmy toured Vietnam in USO shows, once as a solo and later with Nancy Sinatra.
After a full and satisfying career, Jimmy settled down to a houseboat docked in Santa Monica Bay.

When I discovered the tale of Jimmy Boyd, I was intrigued that I knew very little about someone who was obviously a wildly popular and international star. I thought his story would make a great illustration and blog post. However, the story wouldn’t quite fit with my blog’s underlying “dead celebrity” theme, since Jimmy was still alive.

I was patient. Jimmy passed away on March 7 at the age of 70.