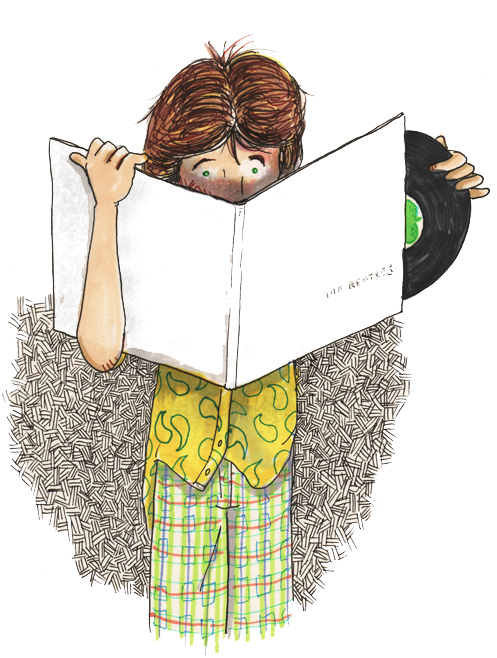 I was eight years old in 1969. I wore cool green and blue plaid bell-bottom pants. I watched The Brady Bunch on Friday nights. I watched The Banana Splits on Saturday mornings. I went to third grade at Watson T. Comly Elementary School. I remember being worried that my older brother might have to go to fight in the war in Viet Nam. (When the US involvement in Viet Nam essentially ended, my brother was 15.)

In 1969, when I was eight years old, something else happened.

Sure, I had the 45rpm singles of “Sugar Sugar” by cartoon idols The Archies and “Aquarius” by smooth soul song stylists The Fifth Dimension. I even had the original Broadway recording of the musical “Hair“. I knew every lyric, even if I didn’t know what they were singing about. (I’m sure my parents were proud to have their eight-year old running around the house singing “Sodomy“.)

But, one day, on a shopping trip with my mom to Northeast Philadelphia’s Roosevelt Mall, I browsed the “Rock” section of Sam Goody. I spotted an album that stood out from all of the psychedelic themed covers. It screamed for my attention. It practically glowed. It was plain and square and white. Under the tautly-stretched cellophane, its cover was embossed with two words  “The”, followed by “Beatles”.

I was mesmerized. Was this the same “The Beatles” that cheerfully wailed about wanting to hold my hand on those old, scratched swirly-labeled Capitol 45s that my Uncle Sidney gleaned from an old jukebox when I was five? Those four fresh-faced moptops weren’t pictured anywhere on the album cover. For Christ’s sake, nothing was pictured on the album cover. I dug deep into my pants pocket and extracted a wad of birthday money. I snatched the double record from the rack and excitedly tucked it under my arm. I marched to the cashier and made the coolest purchase of my eight years on earth.