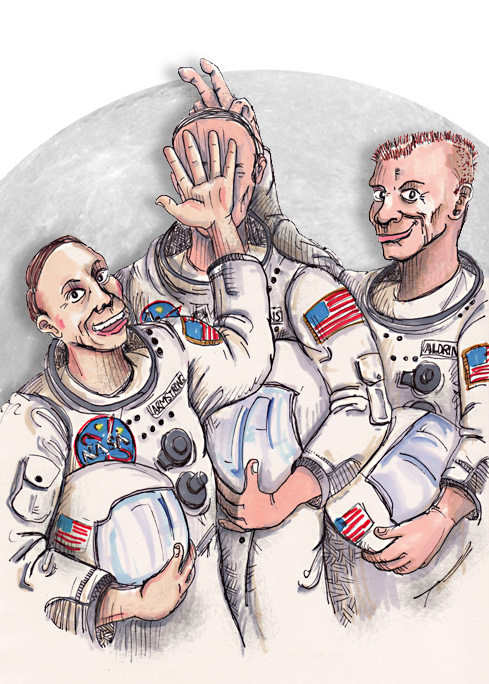 The following is a transcript of a recently discovered recording of a conversation from the command module of Apollo 11 on July 19, 1969.
Michael Collins: Well, here we are, heading to the moon. Man, this is cool!
Neil Armstrong: It sure is, Mike.
Edwin “Buzz” Aldrin: Hey, Mike…. um, you missed the meeting we had just before lift-off, didn’t you?
Michael Collins: Meeting? I wasn’t told about a meeting. I had orders to report right to the launch pad and that you guys would be a little late. There was a meeting? What did you talk about?
Neil Armstrong: We discussed the procedure for tomorrow’s moon landing.
Michael Collins: Oh yeah, baby! The moon landing! I can’t wait! The first three men on the moon! Oh, YEAH!
Edwin “Buzz” Aldrin: Uh, Mike…. Mike….. I don’t know how to say this, so I’ll just say it.
Michael Collins: Say what?
Edwin “Buzz” Aldrin: Well, Neil and I are walking on the moon. And since you’re the “Command Module Pilot”, you’re staying in the capsule.
Michael Collins: I’m WHAT ??? Staying in the capsule??? Are you fucking kidding me?? I didn’t travel 238,000 miles to sit in the fucking capsule so you two assholes can get all the glory!
Neil Armstrong: First of all, Mike, haven’t you noticed that your spacesuit isn’t the same as mine and Buzz’s? Yours doesn’t have nozzles for external breathing tanks. Didn’t that make you wonder a little? You step outside the command module and you are a deadman! Besides, this was planned a long time ago. The plan was that me and Buzz are walking on the moon and you’re driving around the block a few times and picking us up later. Got it?
Michael Collins: Got it? Got it? NO, Neil, I don’t fucking “Got it?”  My family will be watching TV tomorrow! What am I supposed to tell THEM? I told all the guys in aerospace training that I would wave to them from the moon. Aw, Jesus Christ, Neil.
Edwin “Buzz” Aldrin: C’mon Mike, you’ll still be in the history books. You’ll still be remembered.
Michael Collins: But, Buzz, I was gonna…
Neil Armstrong (interrupting): You’re not walking on the fucking moon, Michael! End of story!
(A door slams and several minutes of silence pass.)
Edwin “Buzz” Aldrin: That Collins. Jeez.
Neil Armstrong: Yeah, what a douchebag.