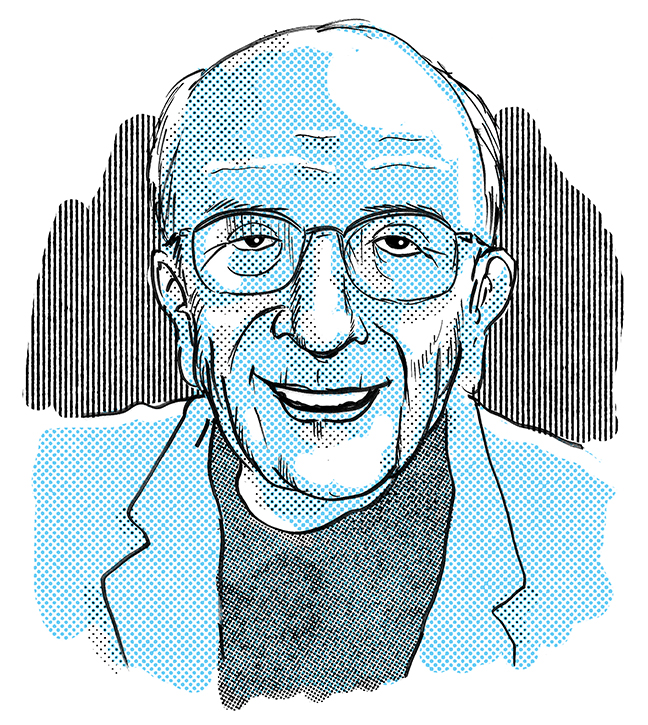 Although it may seem otherwise, Sherwood Schwartz’s life began way before Gilligan’s Island. The New York native moved to southern California in pursuit of a Master’s degree in Biology. In desperate need of money, the naturally-funny Sherwood began writing jokes for Bob Hope’s radio show — a program on which Sherwood’s older brother Al was already employed as a gag writer. Comedian Hope took a liking to Sherwood’s consistently funny output and offered the young writer a permanent position of the show’s staff. Weighing his possibilities — curing the world of disease or making the world laugh — Sherwood chose a steady paycheck and the world of entertainment.

Sherwood went on to write for The Adventures of Ozzie and Harriet, The Alan Young Show and I Married Joan until he was named “head writer” of the popular Red Skelton Show. Sherwood was awarded an Emmy Award in 1961 for his work on the variety show.

At the beginning of the 60s, Sherwood Schwartz pitched his idea for a sitcom to CBS. The show would tell the humorous adventures of a group of survivors of a shipwrecked charter boat. Sherwood envisioned Jerry Van Dyke in the title role, but he turned the part down in favor of the lead in My Mother, The Car. Sherwood went elsewhere to assembled a memorable cast. Gilligan’s Island premiered in 1964 and proved pretty popular with television viewers. With Gilligan’s Island to his credit, Sherwood pitched another idea to the network. Using the timely interest in space travel as a backdrop, Sherwood proposed a series involving two astronauts accidentally travelling back in time to the “caveman” period. The show, It’s About Time, starred comedian Imogene Coca and Car 54, Where Are You‘s Joe E. Ross as a prehistoric couple. To save costs, sets and props from Gilligan’s Island were reused for the new show. Sherwood appeared to be CBS’s “golden boy.” It’s About Time initially produced high ratings, but soon it began to plummet. The premise was reworked, switching the locale to modern times and introducing the cave-people as “fish out of water.” It didn’t work and the show was cancelled after a single season. A short time later, Gilligan’s Island was canceled as well.

As the decade drew to a close, Sherwood pitched a third idea. This wholesome family comedy surrounded a widower with three sons and an “unmarried.” woman with three daughters getting hitched. (The marital status of the woman was not clear if she was widowed or divorced — and the script was fairly ambiguous.) Contrary to popular belief, the premise was not inspired by the recent hit films Yours Mine and Ours or With Six, You Get Eggroll. Sherwood’s original script was conceived years before their 1968 releases. However, Sherwood shopped the show to all three networks, each taking an interest and each suggesting changes. As far as casting, Sherwood pushed for an unknown, up-and-comer named Gene Hackman in the role of widower “Mike Brady.” ABC insisted on the more recognizable Robert Reed, fresh from the legal drama The Defenders. The Brady Bunch was first broadcast on September 26, 1969 and ran for five seasons. Sherwood and Reed would continually butt heads during the series’ entire run. It didn’t matter that it was panned by critics. The show was hugely popular among a young target audience and it continues in reruns — nearly uninterrupted — to this day.

When The Brady Bunch ended its run, Sherwood Schwartz was kind of stuck. He regularly pitched variations on a theme — that theme being either Gilligan’s Island or The Brady Bunch. First, there was Dusty’s Trail, a carbon-copy of Gilligan’s Island with the setting switched from a desert island to the rocky terrain of the Old West. “Gilligan” himself, Bob Denver, played “Dusty,” the inept second-in-command of a wayward wagon that has been separated from the rest of the wagon train. The other characters were blatant copies of the characters from the Island. All three networks passed on the project, though the show found life in first-run syndication. It lasted only 26 episodes of a proposed 33. Sherwood wasn’t as subtle when he presented The Brady Brides, A Very Brady Christmas or the ill-fated and much-maligned Brady Bunch Variety Hour.

Over the years, whenever nostalgia reared its ancient head, Sherwood was front and center with the cast members who were willing to participate. Whether it was current sitcom offering a Gilligan or Brady-themed episode or a flat-out reunion, Sherwood was there with a smile on his face. Sherwood passed away in July 2011 at the age of 94. He outlived most of the Gilligan’s Island cast members, as well as his on-set nemesis Robert Reed.