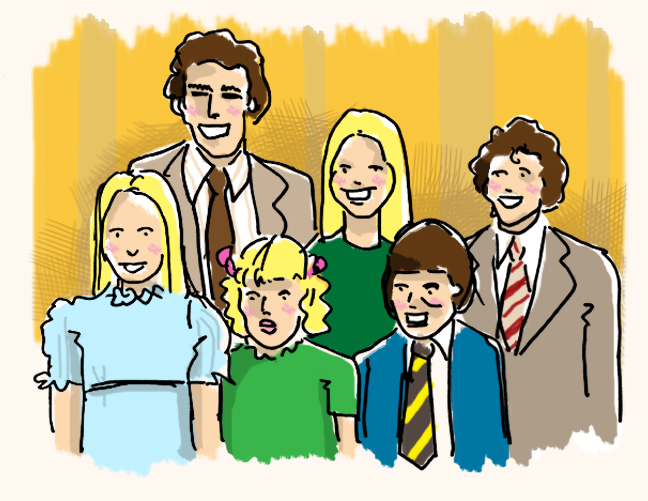 Almost a full year before Jan nearly screwed up Mom and Dad’s anniversary gift when she misunderstood that the engraving on a silver platter was 85 cents a letter, not for the entire thing, she almost screwed up another anniversary gift.

Under Dad’s suggestion, the Brady kids secretly gather to have a photographer take a formal portrait for Mom and Dad’s anniversary. Then, while at the playground, Jan, the regularly troubled middle Brady daughter, mistakenly took another girl’s bicycle. It is revealed that Jan is having difficulty with her vision. Soon, things get worse when her grades begin slipping because she can’t see the blackboard. Recognizing there is a problem, myopic Jan was fitted with a teeny pair of wire frame glasses. Jan becomes angered, declaring that the specs will make her look like a dork, especially when she’s trying to attract boys. (y’know… Marcia’s castoffs.) Jan finally concedes to her parents’ wishes for her to wear the glasses. But, as soon as she leaves the house, she whips them off.

The framed portrait is hidden in the garage in the days before the anniversary, but blind-as-a-bat Jan crashes her bike into it when she wasn’t wearing her glasses. It is ruined. So, the kids gather together to take a duplicate picture and no one will be the wiser. The portrait is finally presented to Mom on the big day. She is ferklempt and notes how pleased she is that Jan wore her glasses. As the family retires to the living room for cake and ice cream, Dad calls Jan for a private conference. Dad confronts Jan, knowing that when he arranged for the portrait she had not yet worn glasses. Realizing the jig is up and that Dad can’t be outsmarted, Jan confesses and waits to receive punishment. Dad sentences her to a week without her bike. Jan, fighting back tears, asks for different penance. In a twist on The Gift of the Magi, Jan explains that she sold her bike to pay for the replacement picture. Dad smirks, believing Jan has learned her lesson.

But, she hadn’t. Jan was a repeat offender. In later episodes, Jan will wish to be an only child, weasel her sister Marcia out of a job at Mr. Haskell’s ice cream parlor, make a bunch of empty promises to her classmates in order to get elected “Most Popular Student,” and conspire with Marcia to make younger sister Cindy believe she’s the next Shirley Temple. All that in addition to sinking her siblings fifty-six bucks in debt over that damn silver platter.

No wonder Marcia was the favorite.