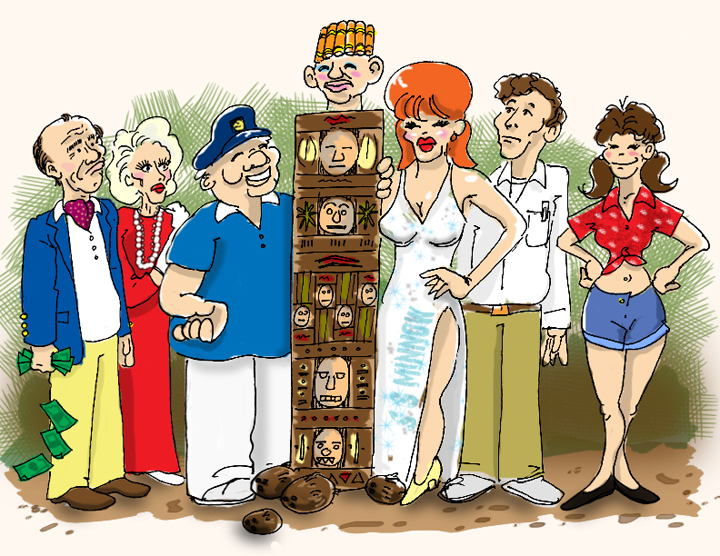 I have a confession to make. I love Gilligan’s Island, the 60s sitcom that, for three seasons, chronicled the totally-implausible antics of seven castaways stranded on an uncharted island somewhere in the vicinity of Hawaii.

Don’t turn your nose up at me. You’ve seen it.

Despite the show exhibiting slapstick humor and unrealistic situations, creator and producer Sherwood Schwartz (the man behind The Brady Bunch) managed to cast some pretty impressive guest stars over the course of three seasons. Remember comedian Phil Silvers hamming it up as eccentric Hollywood producer Harold Hecuba? Remember Hans Conreid showing up twice as confused pilot Wrongway Feldman? Remember insult king Don Rickles as a crazy kidnapper? And then there were the classic episodes — the radioactive vegetables; the silent movie; the robot; the Russian spy that looked like Gilligan. Yep, they don’t write comedy like that anymore!

One of my favorite episodes had Gilligan stumbling upon a native totem pole and observing that the head at the top bore an uncanny resemblance to him! Two of the Kupaki tribe members who believed that hapless Gilligan was their god incarnate were played by Los Angeles Dodgers’ second baseman Jim Lefebvre and outfielder Al Ferrara.

And of course there was the on-going “Mary Ann or Ginger” debate.

In February 2011, my wife and I went to an antique and collectibles show in Gaithersburg, Maryland. Mrs. P looked forward to perusing the tables of vintage treasures offered by the various dealers. I looked forward to meeting Dawn Wells — Mary Ann herself! — who was making a publicity appearance at the show. As my wife wandered among the displays of celluloid jewelry, Bakelite-handled kitchen utensils and piles of cloth-bound books, I made a beeline to the table at which Miss Wells was seated. At 73, she was still as cute as a button.

I waited patiently for my turn to purchase an autographed photo. A man — older than I — was conversing with Dawn in a very animated manner, flailing his wiry arms in exaggerated gestures. I noticed that he was dressed like Gilligan from the show — long-sleeved red polo shirt, floppy white sailor’s hat, baggy khaki pants and deck shoes. It was a tad creepy.

I overheard Dawn explaining to the man that she was planning a Gilligan’s Island-themed book (surprise!) about what life would be like if they were on that island in current times. Finally, the Gilligan look-alike moved on and I greeted Miss Wells with a pitch.

“When it comes time to illustrate your book, you can give me a call!,” I said and I flicked one of my business cards in her direction.

She squealed. “This is great! I certainly will”

We talked a little more. I got her to sign a photo and then went to meet up with Mrs. P. I was borderline giddy.

A few months later, she decided she’d like a logo to use for various promotional applications. After many email correspondences, several revisions and refinements, I presented Dawn with this…

She was thrilled. So was I.