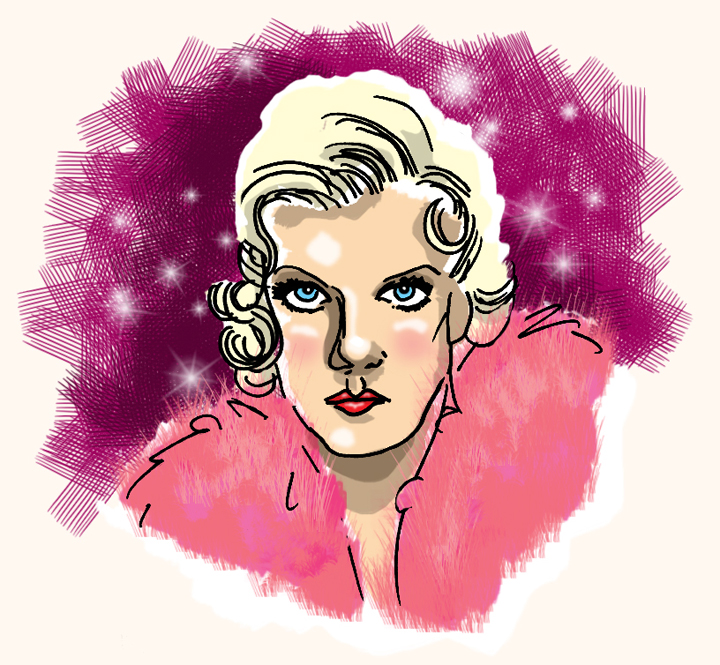 No one dreamed the frail and sickly Harlean Carpenter from Kansas City. Missouri would blossom into the world famous “Blonde Bombshell.” The actress, who as a child who fought off scarlet fever and meningitis, caught the attention of eccentric director Howard Hughes and she was cast in his provocative 1930 film Hell’s Angels. Her sultry screen persona was born, as she uttered the oft-repeated line “Would you be shocked if I changed into something more comfortable?” Jean was known to apply ice to her nipples in order to appear sexier in scenes. It worked. The picture was a hit and the country became obsessed with the young star. Peroxide sales skyrocketed. Blonde actresses were now being considered for the roles of heartless vixens, previously reserved for raven-haired seductresses. Jean’s role the following year in Platinum Blonde gave her true sex symbol status.

Jean appeared opposite James Cagney in The Public Enemy as his subsequent girlfriend, after famously dumping girlfriend Number 1, Mae Clarke, with a grapefruit to the face.

Jean was paired with Clark Gable in six films. While filming Red Dust, their second teaming, Jean’s husband, producer Paul Bern committed suicide. The news nearly halted production, with actress Tallulah Bankhead considered as a quick fill-in for Jean. But, she soldiered on and the film was a huge success. She began to pick and choose her roles, turning down the female leads in both King Kong and Tod Browning‘s infamous Freaks.

In 1935, Jean met and fell in love with actor William Powell. However, two years into their relationship, Jean’s health began to decline. While filming what would be her final picture Saratoga, Jean was hospitalized with uremic poisoning and kidney failure, a result of her childhood battle with scarlet fever. Nearly ten years before the introduction of kidney dialysis, doctors were helpless. Jean passed away in 1937 at the age of 26. With creative camera angles and the help of stand-in Mary Dees, Saratoga was completed and released. It became the highest grossing film of 1937.

Jean was the first movie actress to grace the cover of Life magazine, just a month before her death.