I love television. But, my relationship with television has changed over the years. My formative years with television were the late 60s and early 70s. In the pre-cable days of television, I watched weekly series with diligent regularity – both comedies and dramas. On local UHF* stations, I revisited some of the classic shows from my youth. Once networks like TV Land and Nick at Nite began, I barely got any sleep because I couldn’t tear myself away from that glowing cathode ray tube time machine. Now,  I rarely watch any regular programming on the Big Three networks. Instead, I have discovered Antenna TV and MeTV and my television-watching has come full circle. I have a difficult time leaving the house while I weigh the benefits of going to work versus watching forty-year-old reruns of Family Affair.

So today, on my 51st birthday, my TV habit was further indulged when I attended the final day of the Mid-Atlantic Nostalgia Convention.  At 10 a.m., Mrs. Pincus and I set out for the drive to Cockeysville, Maryland (that’s right – Cockeysville) for this annual gathering of people who haven’t quite accepted the fact that television broadcasts are now in color.

As mentioned previously, I collect celebrity autographed photos and I have been frequenting these shows for over twenty years to add to my collection. Mrs, P, on the other hand, loves buying memorabilia and haggling with the dealers who display their wares in the marketplace areas alongside the featured stars.** (With very few exceptions, my spouse steers clear of the celebrity autograph area, or as she refers to it, “the human zoo.” )

We arrived at the suburban hotel that hosted the festivities. Once we strapped on our all-access wristbands, we strolled the first-floor level of dealer-lined hallways of the convention center. There were vintage theatrical posters, publicity stills of long-forgotten matinee idols and DVDs of obscure B-grade movies – all for sale with mostly over-inflated price tags.  The downstairs housed a huge ball room outfitted with more vendors. The centerpiece of the room was a squared blockade of long banquet tables, stocked with glossy photos and manned by celebrities eager to sign them. I was anxious to get to the lower level to see the ‘special guests” and happily pay them for their signatures. (That sounds tacky when phrased so bluntly. It makes me sound like a “trick” and them sound like “Sharpie pen whores.”)

We descended the escalator and headed to the main room. While my wife examined a display of antique Lone Ranger publicity shots, I spotted Shirley Jones. I excused myself, explaining to Mrs. P, “I’m going to talk to Mrs. Partridge over there.” The white-haired, yet still-striking, Miss Jones was seated behind an array of items chronicling her long and illustrious career, from her motion picture debut in 1955’s Oklahoma  through her Oscar-winning turn in Elmer Gantry  to The Music Man  to, of course, The Partridge Family.  Meeting Shirley Jones was surreal, to say the least. My wife joined me and we sang her praises and gushed as we mentioned our favorites of her roles. She seemed a tad distant, but politely and graciously accepted our compliments. I selected a photo (a reproduction of the Oklahoma  lobby card) and presented it to Shirley for a twenty dollar inscription. With her pen poised in anticipation, she asked, “Would you like a name on it?” “Yes,”I replied, “preferably yours.” Shirley chuckled and I added, “Look at me! I’m smart-assing Shirley Jones!” She laughed again. We offered our collective thanks and expressed our pleasure to have met her. Before making our way to the next table, I asked Shirley, “Where’s your Oscar?” She mockingly raised a half-empty water bottle and waved it high over head, an ersatz solemn expression on her face. 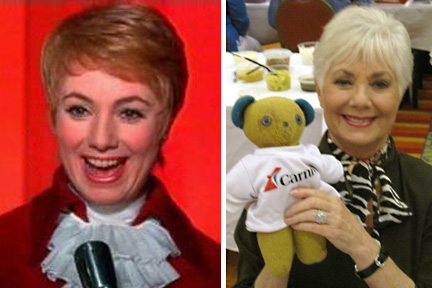 Seated alongside Shirley Jones was the one and only Geri Reischl, whose claim to fame consisted of nine episodes of the infamous Brady Bunch Hour, a 1977 variety show deemed by TV Guide  as one the 50 worst television series in American history. When the original The Brady Bunch  was canceled in 1974, producers Sid and Marty Krofft assembled the original cast for a series featuring singing, dancing, and hokey comedy skits (even hokier than the sit-com). Actress Eve Plumb, the original “Jan,” wanted no parts of this potential fiasco and perky Geri Reischl was recruited to replace the troubled middle sister. Miss Reischl has playfully acknowledged the casting mis-step and has embraced the negativity associated with being “Fake Jan.” Geri, whose attractively zaftig figure was poured into a black mini dress, was a pure delight to talk to. She was cute and animated and exhibited an audacious sense of humor. (During our conversation, I smart-assed her,  as well.) She took an instant shine to my wife (who could blame her?!)  and happily posed for a photo with my wife’s little pal. 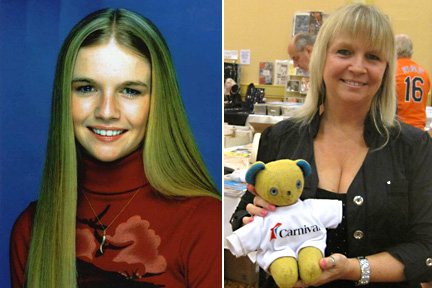 Next, we approached a strapping older man  six-foot-four with fire-white hair contrasting his glowing bronzed complexion. I extended my hand in greeting and it was immediately swallowed up in his massive grasp. He flashed a mouthful of pearly-white teeth and announced, “I’m Ron.” He was Ron Ely, one of a long line of Hollywood Tarzans. Ron starred as the wily jungle dweller for two seasons on the 1966 weekly NBC series. At 74, Mr. Ely still possesses the rugged good looks that made him a heartthrob in the eyes of young girls who preferred loin cloths over mop tops. My wife, moon-eyed and swooning, lavished praise on Ron as I debated over which nearly-naked photo I’d have him autograph. Having already introduced myself, Ron asked if I’d like a name on the photo. Slyly, I used the same line that worked so well on Shirley Jones – the “preferably yours” line. Ron wrote “To Josh,” and handed the picture to me without his signature. Ron Ely had just smart-assed me. It was awesome. (He laughed and eventually signed it with his name.)

Our final celebrity encounter was one I looked forward to, yet turned out to be most unusual. I recently began watching Dennis the Menace,  the late 1950s series based on Hank Ketcham’s syndicated comic strip. I disliked the show as a kid, but I have gained a new respect for it as an adult. Dennis only wanted to help. Mr. Wilson was an irascible jerk and Mr. and Mrs. Mitchell were blithely oblivious. Chockfull of one-dimensional supporting characters, it was TV sitcom at its naïve best. The show’s star, Jay North, was announced early as the convention’s special guest and soon after, Jeannie Russell, who starred as his nemesis Margaret, was added to the roster. I couldn’t have been happier.

Prior to leaving for the show, I printed out three illustrations from my blog featuring characters from Dennis the Menace. (This one, this one and this one.) Jay was sitting alone when I approached his table. He was turned in his folding chair, bored and lost in thought, staring off at nothing in particular. I broke up his daydream with a hearty “Hi Jay!” He looked up. Although gray-haired and a bit stocky, that mischievous twinkle was still present in his eye and the cocky grin of a six-year-old curled across his lips. I slid my drawings out of a manila envelope and presented them to Mr. North, explaining that I have a blog and these had been featured on several posts over the years. His smile widened. “Wow!,” he began, as he examined my artwork, “You got Herb and Billy and Joe. These are great!” I was very pleased. Jay liked my work! From his inventory, I selected a promo shot of Dennis and Margaret for personalizing. Jay took the photo and said to me, “I think we can make an even trade.,” implying that he was accepting my drawings  in exchange for a signed pic. While that certainly was not my intention, I wasn’t going to argue. I asked if I could get Jeannie Russell to autograph it as well. Jay said Sure and called over to Miss Russell, who had wandered off to talk to a show staffer. Jeannie returned to the table and smiled at me as she scribbled her sentiment across the photographic Margaret’s legs. She handed the photo back to me and said, “That’s twenty dollars.” Jay jumped in, extended an arm around her and said, “I’ve comped  this one, Jean. Look at these drawings he did.” Jeannie Russell was less than impressed – by neither my artwork nor the situation at hand. “Comped?,” she questioned. “Yeah,” Jay replied.Jeannie was not happy. Not happy at all and Jay could sense this. I interjected, “Are we cool?” Jay smiled and waved me off. “Yeah, I got it.,” he said as he turned his attention back to Jeannie Russell and actually reached for his wallet. “I’ll  give you the twenty bucks,” he said, as he fished through his paper money for the appropriate currency. I would have gladly paid for the photo, but seeing a pissed-off, grown-up Margaret was worth the price of admission. (Jeannie Russell, I might add, is a very successful chiropractor to the stars in Hollywood. Very successful.)

We circled the perimeter of the room, taking in the various offerings from the collectibles vendors. My wife purchased this giant inflatable jar of mayonnaise and we left. 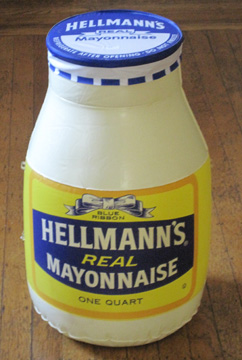 We stopped for gas just off of I-95 North. Across the street from the gas station was this restaurant. 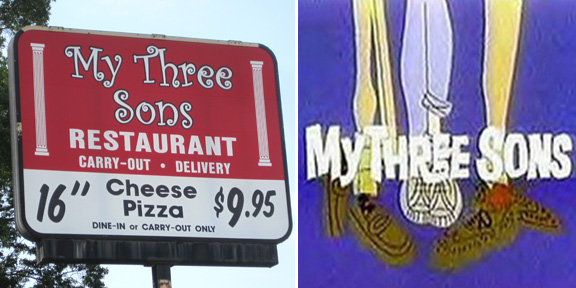 How fitting. I hope Uncle Charley was out in the kitchen.

(Here is an account of last year’s Mid-Atlantic Nostalgia Convention.)

* you have the internet – look it up.

** I use the word “stars” in the loosest of contexts