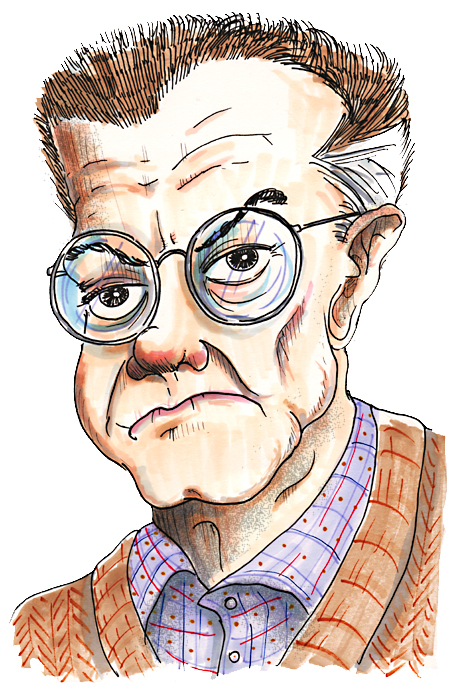 Character actor Joseph Kearns began his career in the heyday of radio in the unlikely role of a pipe organ player. He soon was performing regularly on radio programs like I Married Joan, December Bride, Burns and Allen, Sam Spade and many others. He was the mysterious announcer “The Man in Black” on the radio drama Suspense. His best known radio role was that of Ed, the security guard for Jack Benny’s underground money vault, on The Jack Benny Program. The “running gag” was that Benny had kept Ed on duty at the vault’s door so long that the guard was not aware of current events. When Benny informed him that “The War had ended,” Ed asked whether the “North” or the “South” had won.

In 1951,  Joseph made his motion picture debut in the Ida Lupino-directed Hard, Fast and Beautiful  with Claire Trevor. The same year, he lent his voice to The Doorknob in Walt Disney’s animated Alice in Wonderland. He appeared on both comedy and dramatic series in the early days of television. He was a regular cast member on Our Miss Brooks, Professional Father  and How to Marry a Millionaire. He even reprised his role (appearing exclusively in shadow) as Ed the guard on the TV version of Jack Benny’s show. In 1959, Joseph landed the role for which he is most remembered. He was cast as the irascible Mr. Wilson, the long-suffering neighbor of Dennis Mitchell on the CBS sitcom Dennis the Menace. For three seasons, Joseph’s Mr. Wilson was tortured by Dennis, the eternal pain-in-the ass. On February 11, 1962, CBS aired the Dennis the Menace  episode entitled “Where There’s a Will”, in which Mr. Wilson made out his will and explained to Dennis that he would inherit his gold watch when he dies. Joseph Kearns died from a cerebral hemorrhage on February 17, 1962.

A week or so ago, I called my brother to wish him a “Happy Birthday”. He was lamenting over turning 54. Later, I called him to tell him a bit of information that I hoped would make him feel better about passing another year over the half century mark. I told him that I was watching Dennis the Menace, a show we both agreed we hated watching in our youth. Feeding my obsession for the trivial, I went on to say that I was researching the fate of the show’s various cast members. I knew that Joseph Kearns had passed away during the program’s third season. (He was replaced by the equally annoying Gale Gordon.) What surprised me was Joseph Kearn’s age at the time of his death. He was 55. My brother’s reaction was the same as mine. Fifty-five!?  Jeez! I thought he was at least seventy!  I informed my brother that he looks a hell of a lot better than Mr. Wilson did at practically the same age.

I think I cheered him up. At least a little.