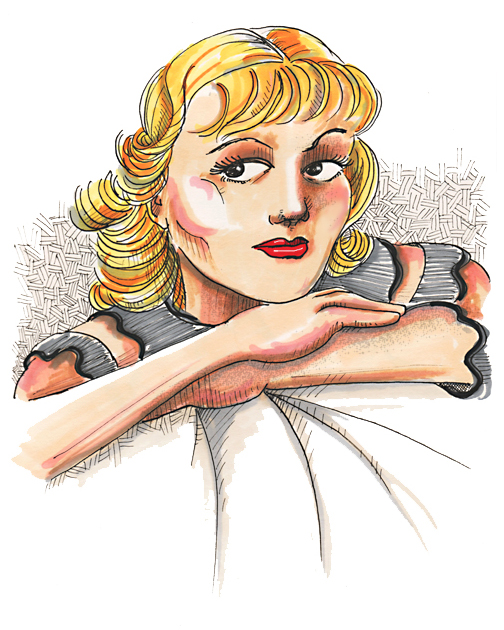 Dorothy Dell aspired to fame from the time she was a child. She won a “Beautiful Baby” contest in her native Hattiesburg, Mississippi at one year old and continued to enter and win others throughout her childhood. In high school in Louisiana, she made friends with Mary Leta Dorothy Slaton, another aspiring actress. The pair became known as “The Two Dorothys” and decided the first one to make the big break into show business would help the other. The two Dorothys entered the Miss New Orleans Pageant in 1930. Dorothy Dell won the contest. Later the same year, Dorothy was named winner of the International Pageant of Pulchritude, the forerunner to the Miss Universe Pageant.

Dorothy turned down initial offers from master showman Florenz Ziegfeld. She insisted on a part for her friend, the other Dorothy, but Ziegfeld said she was too short for the chorus line. Dorothy instead opted for the vaudeville circuit and was accompanied on tour by her family and friend. She finally accepted a stint in what would be the final Ziegfeld Follies in 1931. She stood in for an ailing Ruth Etting and was soon drawing comparisons to Mae West. Hollywood took notice and came calling.

In 1933, Dorothy moved to Hollywood and signed a contract with Paramount Pictures. She was cast as a saloon girl in 1934’s Wharf Angel, beating out established stars like Mae Clarke and Isabel Jewell. She is proclaimed as “the find of the season” in the press. Her next part was in the Shirley Temple vehicle Little Miss Marker  later the same year. She made the musical Shoot the Works  which garnered Dorothy more comparisons to Mae West. Just after the premiere of Shoot the Works, co-star Lew Cody and actress Lilyan Tashman passed away. At Cody’s wake, Dorothy wondered to a friend, The old theater superstition says death strikes in threes. I wonder wholl be next?

Paramount scheduled her to re-team with Shirley Temple in Now and Forever, co-starring Gary Cooper. Before filming began, Dorothy attended a party in Altadena, California with Dr. Carl Wagner, an oral surgeon who operated on her mother a few months earlier. Wagner, a prominent society figure in Pasadena, figured in the police probe into the mysterious murder of Dr. Leonard Siever, a leading Pasadena dentist, who was killed in December 1933. Wagner drove Dorothy back to Pasadena, but the trip was cut short when the car struck a telephone pole, caromed off a palm tree and finally smashed into a boulder. Wagner died in the hospital six hours later. Dorothy was killed instantly. She was 19. Newcomer Carole Lombard took over Dorothy’s part in Now and Forever.

Dorothy’s childhood friend, Dorothy Slaton moved to Chicago and took a job as an elevator operator at the Marshall Fields department store. A chance meeting with popular singer Rudy Vallee led to a singing gig in Manhattan, where she met Louis B. Mayer, head of the MGM Studios. Mayer arranged for a screen test and Dorothy’s career took off. On Vallee’s suggestion, she changed her last name to the French word for “love”  Lamour. Dorothy Lamour always credited her childhood friend Dorothy Dell as the person responsible for the beginning of her own film career.

This post marks the fourth anniversary of the josh pincus is crying blog.