The Illustration Friday challenge word this week is “swell”. 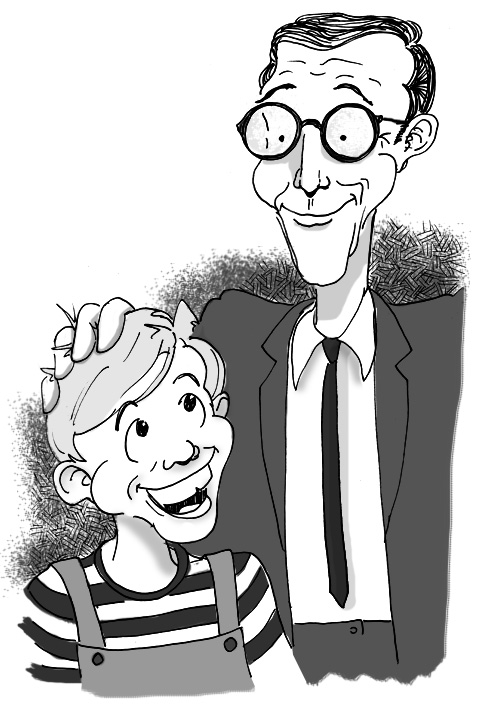 Even as Dennis Mitchell was wreaking havoc in Mr. Wilson‘s petunia bed (no, that’s not  a euphemism), he loved his dad. And what was not to love?

Herbert Anderson was born in Oakland, California in 1917. At 22, he headed to Hollywood to pursue an acting career. After small, uncredited roles in a dozen or so films, he got his break in 1941’s Navy Blues  opposite Martha Raye. He followed that with the World War II epic Battleground  in which he adopted the screen name “Guy Anderson”. Herbert’s regular work continued at Warner Brothers Studios, where he appeared in numerous roles as newspaper men, naval officers, photographers and the occasional “good friend” of the main character. His role of Dr. Bird in the 1955 Broadway production of The Caine Mutiny Court-Martial  led to a reprise of the part in the film version with Humphrey Bogart. Herbert was the only cast member from the play chosen to do the movie.

The new medium of television offered Herbert more opportunities to play familiar “everyday” characters on sitcoms and Westerns. In 1959, he landed the role for which he would be forever remembered, good natured Henry Mitchell, father to Dennis the Menace. For four seasons and 144 episodes, Herbert, as Henry, puffed his pipe and presided over the household at 627 Elm Street. He passed level-headed judgement and extended unconditional love to his son… even when Dennis and pal Tommy were torturing the hell out of poor Mr. Wilson. He also exercised fair discipline when the situation called for it. Dennis was right. He was a swell dad.

When Dennis the Menace  was cancelled, Herbert found steady work in a number of television series, appearing in guest roles on My Three Sons, Batman, The Patty Duke Show, The Brady Bunch  and many others. He performed as the harried, onscreen manager alongside Herman’s Hermits in the 1966 Beatles rip-off Hold On. In 1994, after twelve years of retirement from the entertainment business, Herbert passed way at age 77 from complications following a stroke.