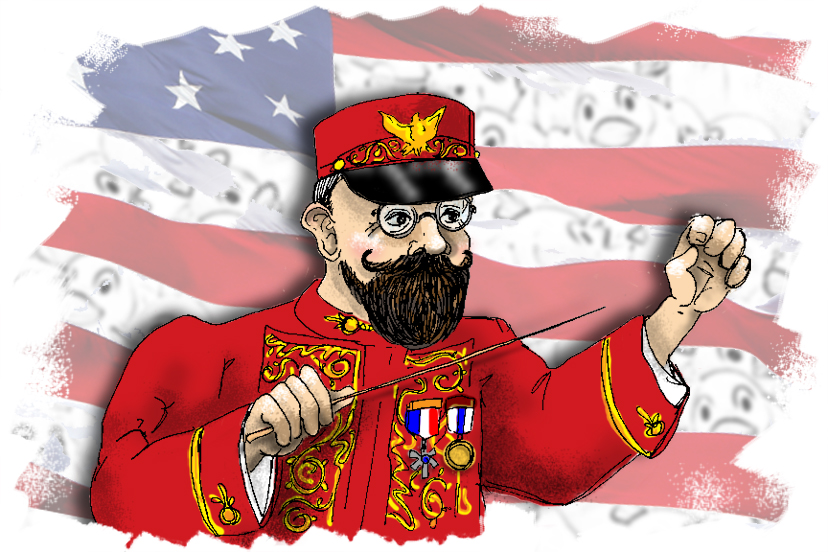 John Philip Sousa composed 136 marches in his lifetime. Sousa, the leader of the United States Marine Band, composed one of his most famous on Christmas Day 1896, as a tribute to his friend David Blakely, the manager of the Sousa Band, who had recently passed away. The rousing composition was “The Stars and Stripes Forever March”. In 1987, an Act of Congress proclaimed the piece as the National March of the United States.

Sousa wrote six verses of lyrics, heavy with heart-stirring patriotic imagery, to accompany his piece. Sousa’s words are almost never sung and are scarcely even known. Instead, most Americans know an alternate set that they are sure are the actual lyrics. You know the ones I’m talking about. The ones that open with “Be kind to your web-footed friends…” Thanks to one Mitch Miller, those words are forever linked to Sousa’s triumphant and lively tribute to his friend and his country.

Mitch was a musician, composer, producer and conductor. He orchestrated the music for Orson Welles‘ infamous War of the Worlds  broadcast in 1938. In the 40s, he was hired as a A&R man at Mercury Records, where he was instrumental in directing the careers of Patti Page, Frankie Laine, Johnny Mathis, Doris Day, Dinah Shore and many others. Mitch pushed his affinity for novelty tunes on the likes of Frank Sinatra, Tony Bennett and Rosemary Clooney, almost ruining their careers. In the 50s, he joined Columbia Records in the same capacity. There, he signed Aretha Franklin to a contract, but she soon left to join Ahmet Ertegun at Atlantic Records. She accused Miller of hampering her creativity. Miller famously passed on two performers based purely on his blatant hatred for rock and roll. Those two singers, Elvis Presley and Buddy Holly, signed on to competing labels.

In the 60s, Mitch Miller had one of the most popular shows on television, Sing Along with Mitch.  For an hour every week, American families tuned in to watch Miller lead a male chorale and several soloists (including Leslie Uggams and future Sesame Street  staple Bob McGrath). Mom, Dad, Grandma and the kids would cheerfully sing back at their television, while “following the bouncing ball” across the song lyrics on the bottom of the screen. Miller presented favorites like “I’ve Got a Lovely Bunch of Coconuts”, “Yellow Rose of Texas” and “When You’re Smiling”. He would end every show by leading the cast (and the home viewers) in a recitation of the silly “web-footed friends” lyrics set to the tune of Sousa’s majestic march, thus permanently altering America’s perception of the patriotic song.

Thanks Mitch. Thanks for everything.