The Monday Artday challenge this week is “Elvis”. 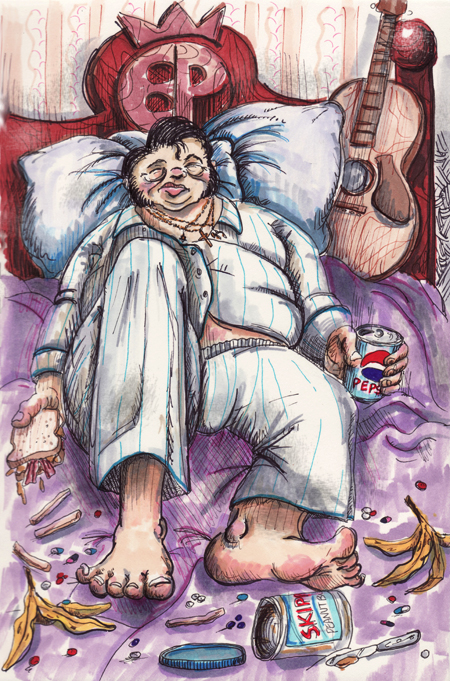 Sure, he was known worldwide as “The King”, but here are a few little-known facts about Elvis Presley.
He was a black belt in karate.
His entourage were known collectively as the Memphis Mafia.
None of Elviss 31 feature films were ever nominated for an Oscar in any category.
Elvis recorded more than 600 songs in his music career, but didnt write a single one of them.
Some of Elviss bejewelled jumpsuits weighed more than twenty-eight pounds.
He only performed five concerts outside the United States  all in Canada in 1957.
Led Zeppelin were big fans of Elvis and were desperate to meet him when they toured the US.
Elvis collected marble statues of the Venus de Milo and Joan of Arc.
Elviss favorite soft drink was Pepsi.
Elvis had “the hots” for Elizabeth Montgomery.
Elvis wore a cross, a chai (Hebrew for “life”) , and a star of David around his neck. He said, I dont want to miss out on heaven due to a technicality.
Elvis’ favorite sandwich was a grilled peanut butter and banana sandwich.
Elvis’ favorite dessert was a hot fudge and amphetamine sundae.