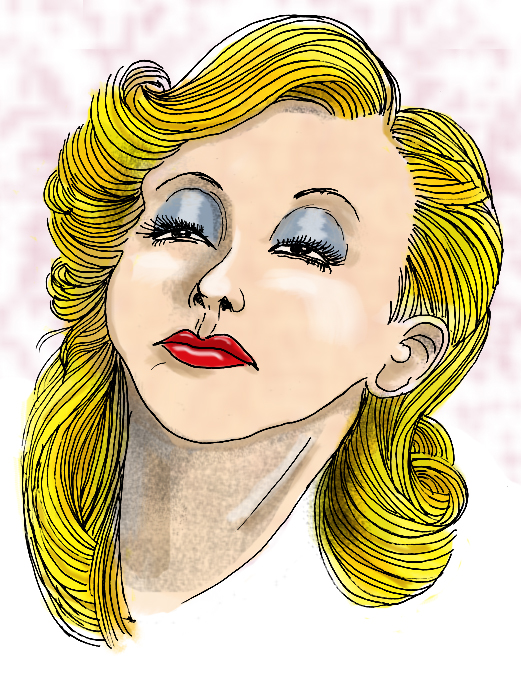 When she was just sixteen, blond-haired, blue-eyed bombshell Barbara Pepper was chosen to be a Ziegfeld Girl on Broadway. That was the springboard she needed to start her career in show business. Soon, she and friend, fellow Ziegfeld girl Lucille Ball, were chosen to join the Goldwyn Girls, as contract group of female dancers at MGM. She made her debut with Eddie Cantor in Roman Scandals  in 1933. Her flashy appearance and hard-boiled “tough gal” personality allowed her to be featured in countless films throughout the 30s and 40s. She was romantically linked with a full spectrum of notable names like Howard Hughes and Peter Lorre to popular comedian Harry “Parkyakarkus” Einstein.

In 1943, she married actor Craig Reynolds. The couple had two sons before divorcing in 1949. Later the same year, Reynolds was killed in a motorcycle accident, leaving Barbara to raise her two small children as a single mother. She had to turn down acting jobs in order to devote time to her family. Soon, the demand for her acting services dried up and the one-time showgirl was forced to take jobs waiting tables and managing a laundry. She turned to alcohol to help her cope. She gained weight and her voice grew raspy as her alcohol intake increased.

Some of her showbiz friends, like Jack Benny and Lucy, offered her small roles when they could. Through the 50s and 60s, she humbly accepted guest spots on TV sitcoms and Westerns. Barbara desperately wanted the role of Ethel Mertz on I Love Lucy,  but known alcoholic William Frawley had already been hired for the series and the production couldn’t risk having another drunk on the set.

Barbara continued to take any part she could, no matter how small. Finally, in 1965, she landed the supporting role of Doris Ziffel on the sitcom Green Acres.  It was a steady paycheck despite her being upstaged by Arnold the Pig (who received more fan mail than Barbara and co-star Hank Patterson combined). After four seasons, Barbara’s failing heath forced her to turn the Doris Ziffel role over to character actress Fran Ryan.