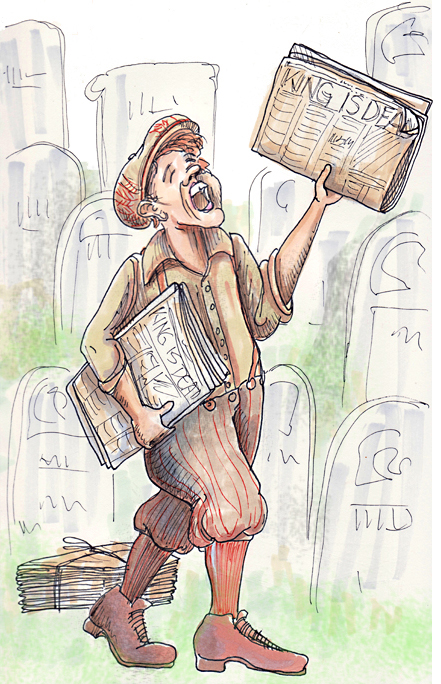 You know those time-lapse scenes in movies from your parents’ youth? The ones that show a montage of events beginning with a spinning newspaper hurtling towards the camera, stopping to display a significant headline splashed across the front page in big, attention-getting letters? How quaint and dated they seemed. Remember the boy on the street corner with his cap and his knee-britches supported by suspenders,  a stack of newspapers under his arm and a single issue waving wildly over his head while his calls of ”EXTRY! EXTRY!” split the air with urgency? Remember the star reporter, sniffing out the inside scoop, his press card tucked in the band of his cocked fedora, his pad and pencil poised at the ready? These are images that will seem more and more unfamiliar as time passes, not unlike horse-drawn carriages and hoop skirts. But horse-drawing carriages and hoop skirts were never popular in my life time or my parents, but newspapers were.

When I was young, I loved waking up early on Sunday mornings and being the first one to the newspaper. I’d carry that heavy folded mass of colorful pulp to the living room and carefully pull out my favorite sections. First the comics, then the movie section, then the glossy Sunday magazine and TV schedule. I’d spread the comics out on the floor and read and savor each primary-colored panel. Sometimes my ritual was interrupted when my cat would park herself smack in the middle of Dennis the Menace or Smokey Stover. I’d pore over the full-page movie ads that previewed the films that were promised to be coming to a theater near me. I’d read the questions in Parade, the full-color magazine supplement, posed about celebrities I’d never heard of. Soon, my parents would awaken and my dad would scan the front page of the paper, curse a few times, light the first of many cigarettes of the day, and tear into the sports page. My mom would call out over the sounds of breakfast preparation to save the coupons for her.

Years later, I bought and read a newspaper every morning as I took the hour-long ride on public transportation to art school in center city Philadelphia. I was surrounded by fellow newspaper readers who silently reviewed the events of the previous day in a cheap and convenient package and at their own pace.

My tradition of purchasing a daily newspaper continued well into the time I entered the working world. I’d buy a paper at my regular stop for coffee on my morning commute. Coincidentally, my career path took me to the production end of the newspaper business. In the days before computers, I was employed as a layout artist doing paste-up at several composition houses,  an occupation that is met with blank stares and is difficult to explain to those outside of the industry. I physically prepared and pasted together pages of ads and copy to ready newspaper pages for the printing process. The tools of my trade were an X-acto knife, a ruler and a keen eye. The last time I worked at a newspaper comp house was 1995. We produced over forty daily and weekly newspapers for area communities and colleges. On my last day of employment there, several editors brought their entire paper in on a floppy disk, only requiring us to print out the fully-composed pages. The death-knell for newspapers had been sounded. I had just given my two-week notice, leaving to take a position at a legal publisher whose entire operation was done on computers. I havent touched an X-acto knife since.

Even as the Internet became more accessible to more people, the newspaper business perceived itself as eternally invincible. However, newspapers found it necessary to continually increase prices as advertisers cancelled print ads in favor of the instant gratification of the Internet. News sources like CNN, with outlets on cable television and the Internet, could now provide information to the masses as events unfolded. By the time the news appeared in the newspaper, it was as old as  pardon the phrase  yesterdays news. With the immediate availability of the Internet, an east coast sports fan whose home team was playing a crucial game in San Francisco would never again have to read the words game ended too late for publication. On my daily train rides to work, I see passengers accessing the Internet on their Kindles and smartphones to check the morning headlines. Suddenly, the mighty newspaper has begun to get thinner in both its editorial and advertising content. Smaller market papers have ceased publication in favor of “online-only” editions. It’s only a matter of time until the large city papers follow suit.

Just last week at a family soiree, my twenty-three year-old son was confronted by a seventy-two year-old cousin who smugly maintained the viability and relevance of newspapers. My son at first countered, then clammed up and politely listened as the old-timer got misty-eyed standing up for his beloved newsprint-and-ink friend.

With the exception of the occasional glance at one of several alternative weeklies, I haven’t read a newspaper in years. As a matter of fact, I don’t know anyone under the age of 40 who has. Newspapers will eventually go the way of the coffee percolator and the VCR, two revolutionary advancements that are now just plain old-fashioned. It may take a little longer to accept, but newspapers, if I may paraphrase the insightful philosopher Samuel L. Jackson, are “as dead as fucking fried chicken.”