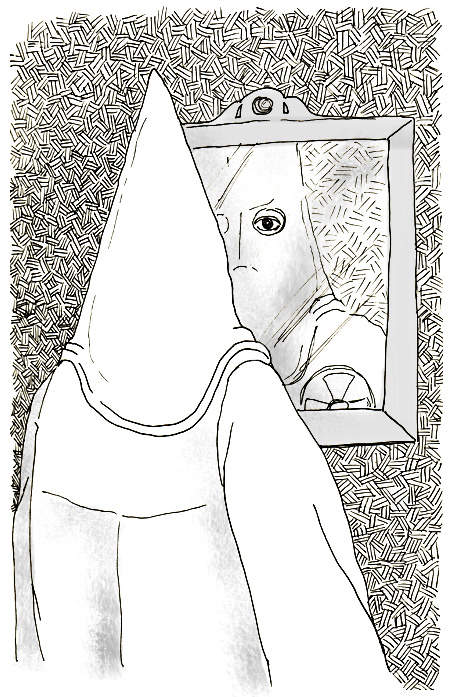 Racists are like the lowly cockroach – filthy, repulsive and filled with the endurance to have kept it going for thousands of years. You catch one skittering by in your peripheral vision every once in a while. Smoosh a cockroach and there’s always another to take it place. Always.

I grew up in one of a handful of Jewish households in my neighborhood. I was on the receiving end of a regular barrage of racist comments from my misguided community peers who were parroting their parents twisted judgment. My father would try to comfort me and tell me to “just ignore them.” Meanwhile, he would toss about “the N word” the way most people say “Pass the salt.” My father learned that from his  mother and father, so, in his mind, there couldn’t possibly  be anything wrong with it. Ah, my grandmother! Once, she spent several days in the hospital. On a visit during her stay, I asked how things were going. She told me the nurse brought her medication in the morning and in the afternoon the (insert a derogatory word for Blacks not regularly used in this country since the Civil War) came in to take a blood pressure reading. The afternoon caller, of course, was also a nurse, but not in the antiquated narrow-mind of my grandmother. This sentiment was not limited to my family, as I later learned. When I got married, I attended a family dinner at my wife’s parents’ home. A cousin arrived late and related an incident involving some kids throwing apples at their car during the drive over. An older uncle, uninformed and unprovoked, questioned “Were they colored kids?” I was dumbfounded.

Those are incidents of malicious racism. I have also experienced innocent racism. You know, the statements that are made with the preface of “I’m not a racist, but… .” by the poor saps who genuinely don’t know any better. Of course, innocent  racism is like getting a small kick in the balls. Years ago, I was employed at a small graphic arts studio that did a lot of preparation work for local quick printers. In the days before home computers, I produced flyers and invitations and a lot of menus for local sandwich shops and pizzerias. One day, the well-dressed owner of several hoagie shops came in to discuss the design for his take-out menus. In the course of our exchange, this man – in his three-piece suit, coiffed hair and pinkie ring – noted that the prices and items differ for the locations in the “less-affluent/more urban” areas because (and I quote) “Black people eat different food from the rest of us.” Some time later, I had a job in the layout department at a legal publisher, where I worked closely with manuscripts. The nature of the job had me dealing with the proofreading department on a regular basis. One afternoon, close to deadline, I was waiting for a manuscript to make its way back to me. I inquired about its status to the proofreading manager – a gum-snapping, teased-haired ancestor to Jersey Shore’s  Snooki. She motioned to a clump of empty desks laden with overflowing “IN” boxes and informed me that the manuscript in question was given to (and I quote) “the little Chinese girl” before she went to lunch. The object of her offensive comment was a young lady whose parents were from Guam – a US territory – and was as American as apple pie.

For many years, my wife’s family owned and operated a general merchandise store in a farmer’s market in a rural area just outside the fifth largest city in the country. In addition to stocking an unusual combination of basic household staples and novelty items, my wife and mother-in-law were renowned for their eclectic inventory of pop culture collectibles. The clientele for the weekend-only market consisted of old-time country folk and their possibly inter-married offspring. In 1954, when my in-laws opened their store, they were the only Jews anyone in that area had ever seen. Black and Asian customers were rarities and repeatedly turned locals’ heads. On one particular Saturday, a potential customer was perusing the substantial selection of items featuring the rock group KISS. The shopper turned to my mother-in-law and said “He’s a Jew, you know”, gesturing towards a likeness of bassist Gene Simmons. Taken off-guard, my mother-in-law replied with a confused “Huh?” The patron continued, “Him! That’s why KISS goes on so many tours. ‘Cause Jews have to make more money.”

During my time in retail advertising, a general manager was adamant about the targeting of our mailed promotional material. “Watch the zip codes where this goes,” he said expressing solemn concern, “I don’t want to advertise in Black neighborhoods.” As though their money is not as valuable. He was also uneasy about driving his Lexus through areas that he deemed “questionable”.

My responsibility with my current employer is to produce advertisements on a more sophisticated level. (Without going into revealing detail, my main client base consists of those members of the working world who practice jurisprudence.) Recently, a respected attorney, who is African-American*, cited our selection of ads depicting silhouetted  figures in varied poses as “having no appeal to African-American women.” He offered additional criticism, indicating he could tell that none of the silhouettes were African-American. Upon closer inspection of the figures, I observed that no Asians, Italians or gays were featured either.

I believe that it is just human nature to be leery of anyone different; anyone we don’t see as a reflection of ourselves. And that, by definition, is “racist.” So, we are all racist in our own way, whether we like it or not. And if you say that you are exempt and you have never had a racist thought, well, then you are a racist and  a liar.

* I usually refrain from using that term, as I find it offensive and misleading. My wife is friendly with a lovely family of four; the mother is a local girl, the husband originally from Cape Town, South Africa. The children were all born in the United States. Based on their lineage, those kids are fully within their rights to be referred to as “African-American,” even though their skin is as white as a scoop of vanilla ice cream.