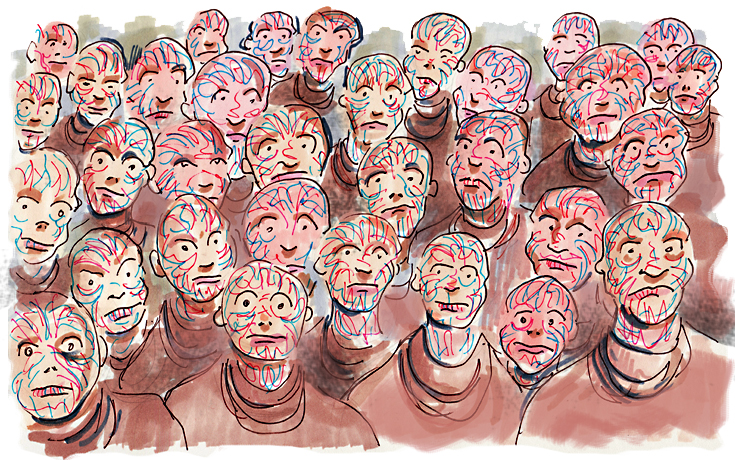 After a full week of the draining drudgery of elementary school, there was nothing I liked better than spending Saturday afternoon at a movie matinee. I’d call up a bunch of friends from school and we’d hastily make plans to meet at the nearby Leo Theater or the Orleans, which was a little farther away. Rarely, we would opt for the dreaded Parkwood Theater, although it was closer to my house than the other two theaters. The Parkwood was an ominous gray building at the end of a strip center that also housed a drug store, a barber shop and – if my memory is correct – seven beer distributors.

The Saturday matinees of the 1960s and early 70s would show a different offering than the regular evening feature. The program would usually start off with previews of the next weekend’s show, followed by a cartoon and the first of usually two films with – what the theater management believed – an appeal to children. One would think that kiddie entertainment would include Mowgli’s animated adventures in “The Jungle Book” or the musically whimsical “Chitty Chitty Bang Bang.”  I, however, remember seeing such child-friendly features as “Dracula – Prince of Darkness,” “Witchfinder General” and the occasional K. Gordon Murray freak-out. I saw Walt Disney’s “Darby O’Gill and the Little People” with Scott, a friend from school. This deceitful Disney film had Scott screaming and fleeing from the darkened auditorium when the wailing banshee appeared on-screen in her green-glowing glory. It was a far cry from political correctness of “Night in the Museum” or “Legend of the Guardians: The Owls of Ga’Hoole.”

One Saturday, my mom dropped a station wagon full of my friends off at a showing of “Beneath the Planet of the Apes,” the inferior first sequel to the Charlton Heston sci-fi blockbuster. It didn’t matter that I had not seen the original. A couple of my friends were not even aware that an earlier, similar movie had preceded this one. We were there to stuff ourselves with candy and popcorn and not be bored for three hours.

Overstocked with snacks, my nine-year-old pals and I found three seats and sat down as the theater lights dimmed. When the movie began, we sat riveted as we watched stranded astronaut Charlton Heston (you know – Moses! ) disappear behind a wall of fire and a guy who looked just like him (low-budget substitute James Franciscus) begin his quest to find his fellow space traveller.

And then the armies of apes showed up! It was so cool! We didn’t need a plot anymore. All we needed to know was the apes were evil and the few mute and primitive humans had to survive behind the leadership of the guy who kind of looked like Charlton Heston. The ragtag troop of grimy humans came upon a race of other humans in an abandoned subway station. These cleaner humans wore long flowing robes and actually spoke, but, to my young ears, they sure spoke weird!  One of the guys even looked like King Tut from our favorite show “Batman”. They explained that they were a peace-loving people and they showed off the deity they worshipped. It was a giant atomic bomb. (We knew what that was because it was brought up constantly by our parents and on the news amid speculations about the ongoing Vietnam War.) Despite the political overtones going right over our heads, we were pretty entertained.

Suddenly, the robe-wearing people began their worship service and, in unison, they announced “I reveal my Inmost Self unto my God.” Then, they all reached up and pulled their facial skin off of their heads, revealing a poorly-executed special effects appliance, slightly reminiscent of a mass of veins and Silly Putty. However, I thought it was pretty effective and it succeeded in scaring the proverbial shit out of me. I recoiled against the back of my seat and stared in horror at the hundreds of actors up there on that screen, baring the results of four hours in a make-up chair and holding a flimsy rubber replica of their real face.

Forty-plus years later, I can’t get that image out of my mind. And I’ll still watch any of the “Planet of the Apes” films, if I spot one in the television listings. Just, not the Tim Burton one.