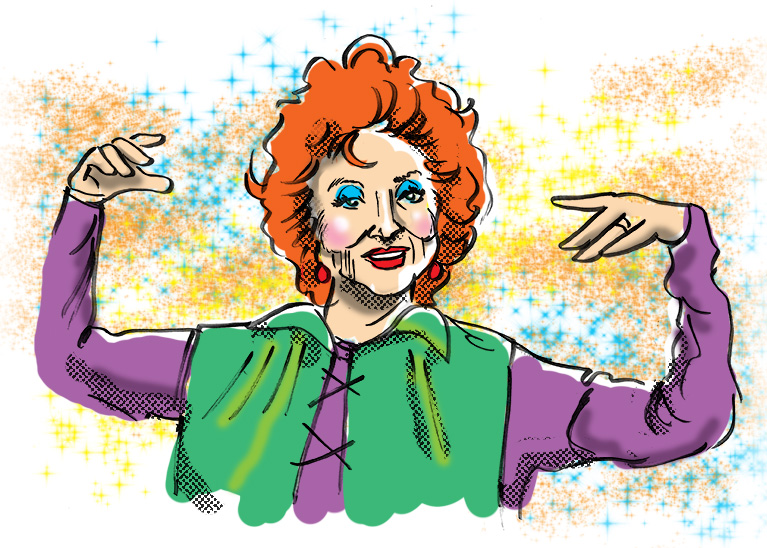 In 1941, Agnes Moorehead made her impressive debut as a member of Orson Welles‘ Mercury Players in the masterpiece Citizen Kane. She began a thirty-plus year career than gained her admiration and critical acclaim, as well as four Academy Award nominations.

Agnes appeared in 58 films before she signed on for the role as Samantha Stephens’ mother Endora on the classic TV sitcom Bewitched. She never thought the show would be successful, so she had her contract written with the stipulation that she would appear in only eight out of every twelve episodes. She felt the writing was not up to the quality of movie scripts and she wished the freedom to pursue film projects. For her role of Endora, Agnes was recognized with six Emmy nominations, but curiously she won her only Emmy for a dramatic guest role on The Wild Wild West.

In 1956, Agnes appeared in the Howard Hughes-produced film The Conquerer,  a poorly received story of Genghis Khan starring a horribly miscast John Wayne in the title role. The Conquerer  was shot on location in St. George, Utah, 137 miles downwind of the Nevada test site for Operation Upshot-Knothole, where extensive above-ground nuclear weapons testing occurred. During the grueling shoot, the cast endured 120 degree heat, flash floods and even a panther attack. However, they were unaware of the dangerous clouds of nuclear fallout and radioactive dust that funneled into their location. For thirteen weeks, the actors and crew were exposed to the deadly contaminants, no doubt inhaling a fair amount of it in the process. After production closed, Hughes had sixty tons of contaminated dirt from the area shipped back to Hollywood for re-shoots.

Five years after production, the film’s director Dick Powell died of cancer. Agnes Moorehead, along with stars John Wayne and Susan Hayward, died of cancer in the mid-1970s. Co-star John Hoyt died of lung cancer in 1991. Supporting actor Pedro Armendáriz was diagnosed with kidney cancer in 1960 and committed suicide after he learned it was terminal. In all, 90 of the 220 members of the cast and crew contracted cancer, as well as half of the residents of the town of St. George.