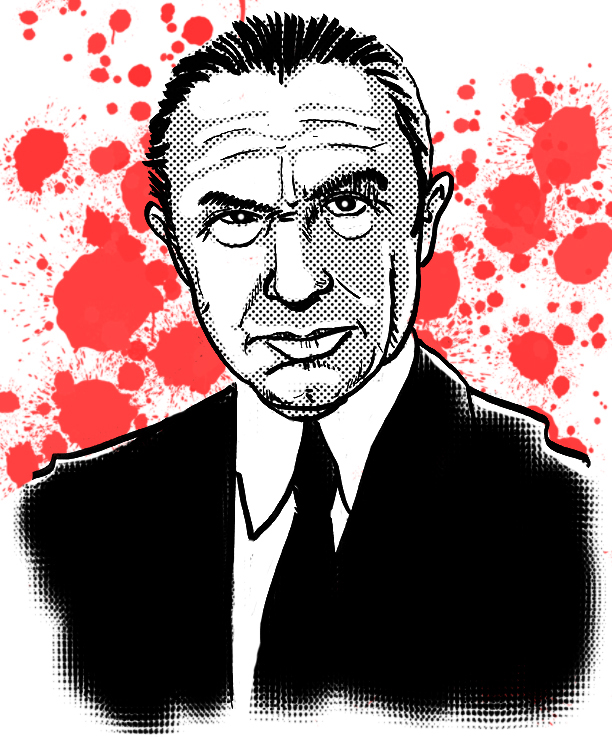 Béla Ferenc Dezső Blaskó was born in Lugos, Hungary in 1882. As a teenager, he began acting in plays and operettas. He moved to Budapest where he performed in dozens of roles with the National Theatre of Hungary. He always claimed that he was “the leading actor of Hungary’s Royal National Theatre,” but there is no evidence to support his claim. His roles were mostly small, supporting roles. He fled his native Hungary to avoid repercussions of his activism against the Hungarian revolutions of 1919. He lived and acted in Berlin using the name “Bela Lugosi,” before heading to the United States.

He formed a small stock company with fellow Hungarian immigrant actors in New York. In 1927, he was approached to star in a Broadway play based on Bram Stoker‘s vampire novel Dracula. The show ran for 261 performances and Bela toured the country to rave reviews. Curiously, when Universal Studios was casting the film, Bela was not under consideration. The hope was that Lon Chaney would make his talking picture debut in the title role, but he died before filming could begin. Director Tod Browning eventually relented and cast Bela.

Due to his association with Dracula, Bela was relegated to a career in horror films, something that did not please him. He fancied himself a Shakespearean actor and felt horror was beneath his talents. He was often paired with Boris Karloff and, despite common belief, the two were friends, although Bela was initially mistrustful of Karloff. He often accused Karloff of trying to upstage him.

As horror films began a decline, so did Bela’s career. A 1938 re-release of Dracula and Frankenstein as a double feature was a shot in the arm that Bela’s career needed. He was offered roles in horror films in the ’40s and he was not very discerning. He began to appear in low-budget ventures for inexperienced directors at small studios purely for the money. He had a methadone habit to support, stemming from his treatment for chronic sciatica. He reprised his role of “Dracula” in the popular Abbott and Costello Meet Frankenstein, but soon found himself in lowbrow comedies, including one opposite Martin and Lewis lookalikes Duke Mitchell and Sammy Petrillo,

While living in poverty, ambitious but inept director Ed Wood reignited Bela’s career, casting the one-time star in several of his achingly-low budget films. During post-production for Bride of the Monster, Bela sought medical assistance in combating his drug addiction. He was surprised by a hospital visit from singer Frank Sinatra, who insisted on paying for Bela’s expenses, despite the two never having met.

Ed Wood shot some test footage for an unnamed, unscripted future project. The shots featured Bela in front of actor/wrestler Tor Johnson’s home and in a cemetery. The footage was later used in the much-derided Plan 9 from Outer Space, which was filmed mostly after Bela’s death. Bela died in his Los Angeles apartment in 1956 at the age of 73. He was buried in a prop cape from one of his many “Dracula” roles, although this was not a request by Bela. It was a decision made by his fourth wife Lillian.