The challenge this week at sugarfrostedgoodness.com is “black and white“. 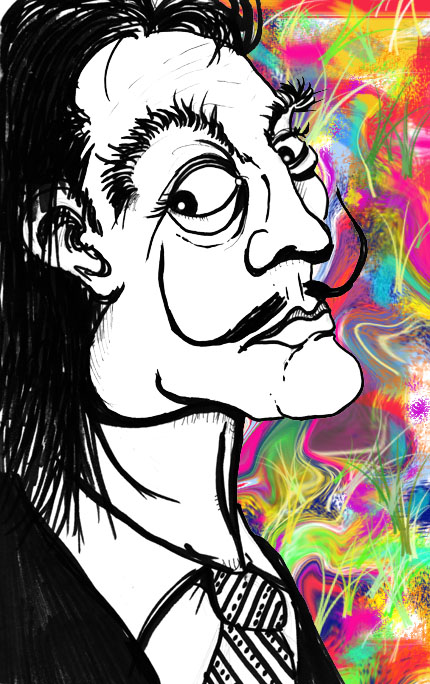 When presented with this challenge, the first image that came to mind was Salvador Dalí. I thought that the topic of “black and white” could give me the chance to experiment, as it is so non-specific. And what better experimental subject than Dalí.

Salvador Domingo Felipe Jacinto Dalí i Domènech, 1st Marquis of Púbol was born on May 11, 1904, in the town of Figueres, in the Empordà region close to the French border in Catalonia, Spain. Dalí’s older brother, also named Salvador, had died nine months earlier. His father, also named Salvador, was a middle-class lawyer and notary whose strict disciplinarian approach was tempered by his wife, (not named Salvador) who encouraged her son’s artistic endeavors. When he was five, Dalí was taken to his brother’s grave and told by his parents that he was his brother’s reincarnation, which he came to believe. Dalí had an affinity for doing unusual things to draw attention to himself. This sometimes irked those who loved his art as much as it annoyed his critics, since his eccentric manner sometimes drew more public attention than his artwork. He didn’t care what his critics thought of him and his actions. He relished the attention and enjoyed the feeling of pissing people off. When signing autographs for fans, Dalí would always keep their pens.

Dalí once said, “There is only one difference between a madman and me. I am not mad.”

I can relate to that.