The challenge word on illustration friday is “hats“. 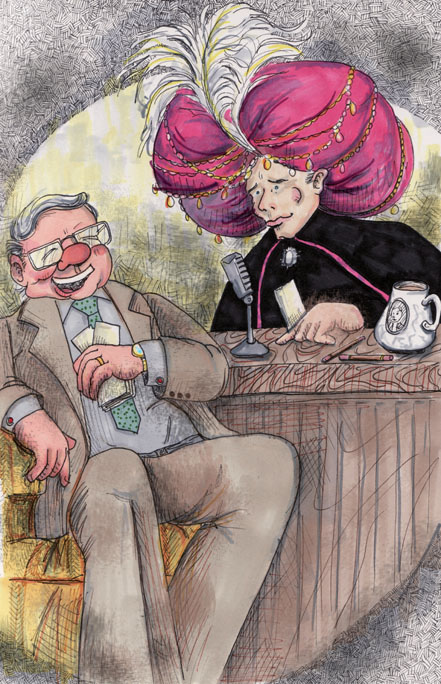 With the impending retirement of Jay Leno as host of the Tonight Show, it’s hard to believe that there is almost an entire generation who doesn’t know who Johnny Carson was. For many, Leno has always been the host of the Tonight Show. When Johnny stepped down on May 22, 1992, it most definitely was the end of an era. For 30 years, Ed McMahon‘s introduction of “Heeeeeeeeeeere’s Johnny” was the beginning of America’s bedtime ritual.
The Tonight Show featured many characters during its run. One of the most popular was Carnac the Magnificent. With the name taken from the stage name Johnny used as a magician, Carnac was “a seer, sage and soothsayer”. America’s excitement piqued when this “vistor from the East” was announced by Ed. The bit featured Johnny, decked out in an impossibly large turban and cape, as the psychic, who would divine the answers to the questions that were in envelopes “hermetically sealed” and had been kept in “a mayonnaise jar on Funk and Wagnalls’ porch since noon” that day. One at a time, Johnny would raise the envelopes to his forehead and announce an answer like “Dippity-do”. Then, he would tear open the envelope and read the question printed on a card: “What forms on your Dippity early in the morning?” The audience would laugh or groan (or both). And so it went.
A: Bible belt.
Q: What holds up Oral Roberts’ pants?
A: An unmarried woman.
Q: What was Elizabeth Taylor between 3 and 5 pm on June 1, 1952?
A: Clean air, a virgin and a gas station open on Sunday.
Q: Name three things you won’t find in Los Angeles.
If a particularly bad joke met with a large groan from the studio audience, Carnac would curse them with “May a crazy holy man set fire to your nose hair.” or “May a queasy camel freshen up your mother’s evening bath.”

I haven’t watched the Tonight Show since 1992. I think I know why. Who could possibly top Johnny Carson?
He was a tough act to follow.