The challenge on illustrationfriday.com this week is “hats“. I really couldn’t decide on one idea, so I did two. This is the FIRST idea. Here is the second. 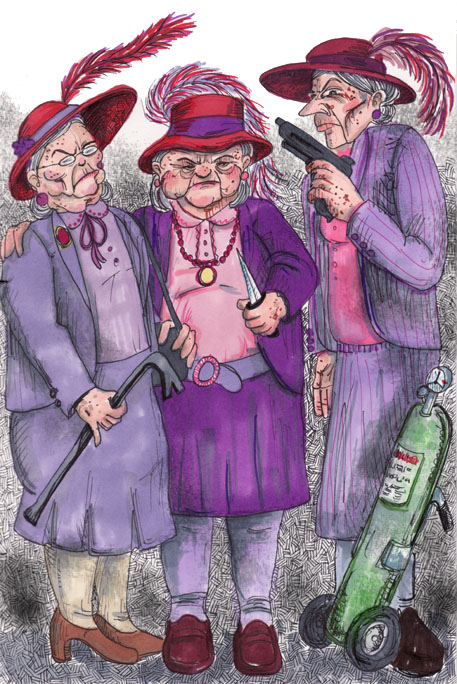 Over-50 communities and retirement homes across the country have seen vicious gangs appear. Gangs of desperate old ladies terrorizing shopping malls and Sunday brunches everywhere. They dress in gang colors of red and purple and they call themselves The Red Hat Society. Wherever they go, they strike fear in regular, upstanding citizens. These Red Hatters have been known to completely take over entire rooms in restaurants. They giggle and cackle and prance around in their decorated red hats and wild purple wardrobe. They commandeer buses and descend on malls and hotels and casinos. Sometimes, they even bring their own oxygen with them.
Their origins can be traced to a poem, written in 1961, by Jenny Joseph called Warning (a very ominous title, indeed). The first verse reads:
When I am an old woman I shall wear purple
With a red hat which doesnt go, and doesnt suit me.
And I shall spend my pension on guns and ammunition
And combat boots and flak jackets.
I shall push people who get in my way
And steal stuff from shops and totally ignore alarm bells
And fire my .45 into the air for no good reason
And make up for the sobriety of my youth.
I shall go out in my red hat and make people turn their heads
And I will kick their asses if they laugh and point
And I sure as hell wont take any shit from the man.

They are dangerous. Run for your lives!