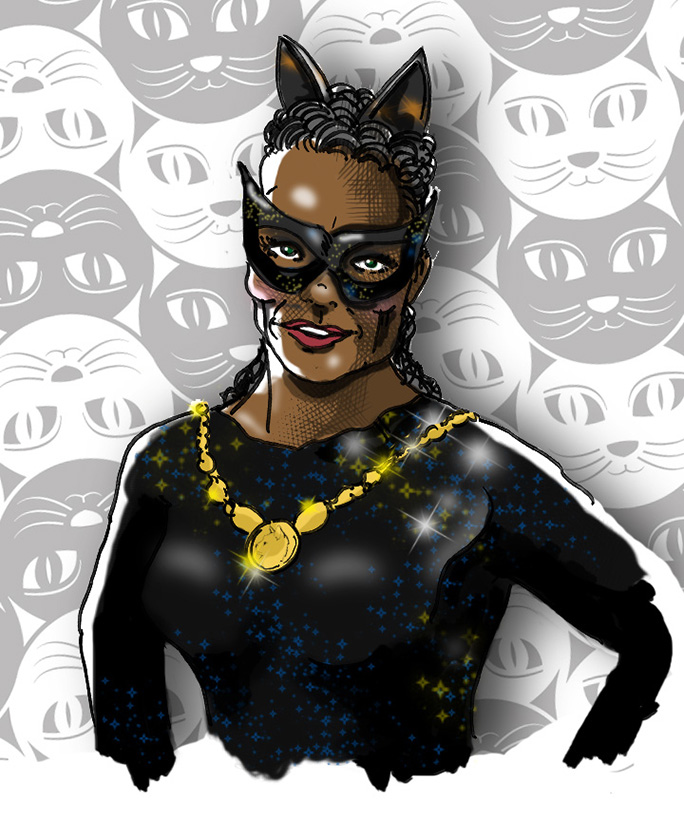 I loved Batman, the campy cool TV series whose episodes were broadcast twice weekly on ABC for two of its three-season run from 1966 until 1968. Batman, starring Adam West, in his best ultra-suave put-on, featured a “who’s who” of Hollywood notables in guest villain roles throughout the entire 120-episode run. Since the show appealed to mostly the under 13 demographic, a lot of these featured celebrities were unknown to its target audience. However, moms and dads (like my mom and dad) recognized these personalities immediately, reminisced about their heyday and relished their hammy appearances. As a six-year old, I had no clue that Cesar Romero was a dashing leading man of 1940s cinema or Burgess Meredith was a respected veteran of dozens of films and was briefly wed to screen siren Paulette Goddard. To me, they were larger-than-life cartoons, menacing the Caped Crusaders from the confines of a cockeyed camera shot.

When the third season of Batman began, series favorite Julie Newmar left the role of “Catwoman,” the Dark Knight’s sultry antagonist. She was replaced by the equally sultry Eartha Kitt. This was a pretty groundbreaking move for 1968, considering that no reference was made or concern was given to the fact that Miss Kitt was African-American. She still flirted with the whiter-than-white West and, surprisingly, no one put up a fuss. Eartha Kitt appeared as “Catwoman” on three episodes of Batman (not counting two uncredited cameos announcing the she would be the guest of the following week’s episode). At my young age, I knew as much about Eartha Kitt’s career as I did about nuclear physics, but prior to donning that skin-tight catsuit, what a career she had.

Eartha had a sketchy childhood. According to one story, she was born to a Cherokee/African mother on a cotton plantation in South Carolina, a birth that was the result of rape. Her mother married a black man who refused to care for young Eartha because of her pale complexion. Eartha was passed around from relative to relative until she wound up in Harlem, New York where she lived with her Aunt Mamie and attended the Metropolitan Vocational High School (later renamed the High School of Performing Arts).

Eartha’s career took off during her stint with the Katherine Dunham Company, a performance troupe where she honed her singing skills and perfected her dancing. In the 1950s, Eartha released a slew of popular songs including “Let’s Do It,” “C’est si bon,” “Just an Old Fashioned Girl,” “Monotonous,” “Love for Sale” and her famous holiday favorite “Santa Baby.” From performing in Europe, Eartha learned and spoke fluent French, as well as German and Dutch. She sang and recorded songs in eleven different languages throughout her career.

Orson Welles gave Eartha her first stage role as “Helen of Troy” in his production of Dr. Faustus. He went on to a stellar Broadway run, eventually earning some well-deserved Tony nominations. She also appeared frequently in films and episodic television.

In 1968, Eartha was invited to a White House dinner at the request of President and Mrs. Johnson. First Lady Lady Bird John asked Eartha her views on the Vietnam War. Eartha, an outspoken critic of the war, bluntly replied: “You send the best of this country off to be shot and maimed. No wonder the kids rebel and take pot.” Mrs. Johnson was brought to tears. Eartha’s career took a major hit. She found it difficult to get work as a result of the incident. She was labeled a “sadistic nymphomaniac” by the CIA, who compiled a dossier on the actress filled with falsehoods. Finding herself unjustly blacklisted by the American entertainment industry, she was welcomed in Europe and Asia and her career once again flourished.

She was able to return to Broadway in the 1970s and was very well received. Eartha starred as “The Fairy Godmother” in a successful run of Cinderella, as well as an acclaimed appearance as “The Wicked Witch of the West” in a revival of The Wizard of Oz. With a announcing credit on a TV commercial for Steely Dan‘s “Aja” album, Eartha embarked on a new career as a voice actress, lending her seductive vocal tones to cartoons, including her scene-stealing turn as the oily “Yzma” in Disney’s The Emperor’s New Groove, a role she reprised in two television cartoon continuations, The Emperor’s New School and Kronk’s New Groove. She was even depicted in an episode of The Simpsons as one of Krusty the Clown’s ex-wives.

In her later years, Eartha was a visible and active supporter of the LGBT community, appearing a numerous rallies and fundraisers, campaigning for same-sex marriage and equal rights. She was no stranger to public causes, actively supporting underprivileged youth in the Watts area of Los Angeles in the 60s and 70s, as well as women’s rights throughout her life.

Diagnosed with colon cancer, Eartha passed away on Christmas Day 2008. According to her daughter, who was with her when she died, Eartha “left this world literally screaming at the top of her lungs.”

No wonder “ev’rybody wants to be a cat.”