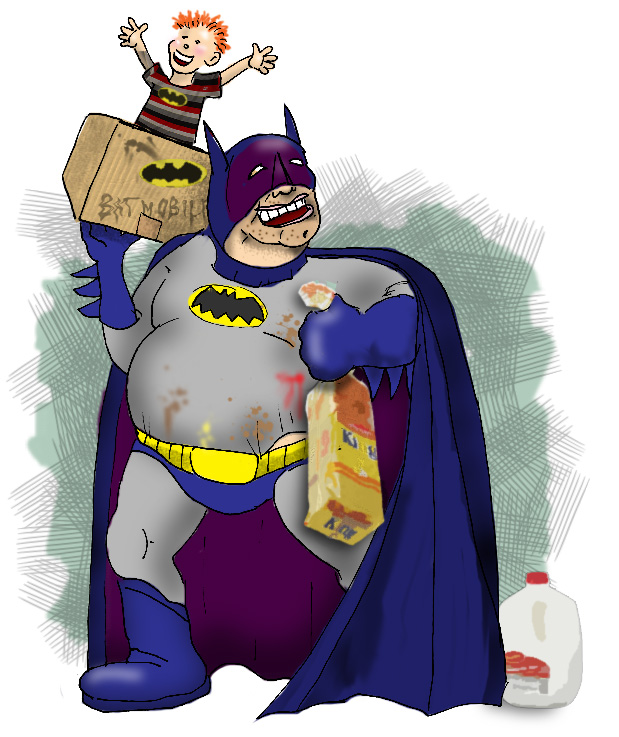 My Uncle Sidney was married to my mother’s sister, Aunt Claire, for an undetermined period of time. I have very fond memories of my mom and Aunt Claire taking me to the zoo, to Cherry Hill Mall, to the swim club in the summer — all over the place. However, I can recall few instances when I actually saw Aunt Claire and Uncle Sidney together. At Thanksgiving, annually hosted at our house, I remember Aunt Claire, anxiously arranging and rearranging the place settings on the aluminum folding table set up in our living room and flitting into the kitchen to assist my mom (but only succeeding in getting in her way). But, I can’t quite place Uncle Sidney at any family gathering. That’s not saying that Uncle Sidney didn’t show up for meals at our house. On the contrary, he made it a point that, when he did stop by, it was just minutes before a designated meal. (My father made angry note of this phenomenon on many occasions.)

In 1966, ABC premiered a new show called Batman. Filled with campy acting, pop-art scenery and purposely hokey dialogue, it was an instant hit. My brother (at nine) and me (at five) — along with my Uncle Sidney — were captivated by the antics of the Caped Crusaders with their wild costumes and their onomatopoeia-filled fist fights with the henchmen of that week’s “special guest villain.”

At the time, Batman  was unique in its broadcast schedule. Paying homage to the movie serials of the 1940s, Batman was shown twice weekly. The first episode would conclude with the Dynamic Duo caught in some impossible-to-escape predicament. The announcer would encourage viewers to tune in tomorrow at the “same Bat-time on the same Bat-channel.” Twenty-four hours later, ABC would air the exciting epilogue to the adventure and my brother and I were right there in front of the TV with Uncle Sidney spread out on the sofa, cheering the action on and eating every last crumb of food raided from my parents’ kitchen. Even after scarfing down a full dinner, courtesy of my mom, Uncle Sidney would park himself on my parents’ living room couch, with his two favorite nephews before him, and eat an entire loaf of bread and drink an entire gallon of milk.

One day while visiting my Aunt Claire at the small apartment she shared with her elusive spouse, my Uncle Sidney uncharacteristically arrived home with a large, empty, cardboard box. After Aunt Claire left the room (they never seemed to be in the same place at the same time), I was instructed by Uncle Sidney to use my budding artistic skills to transform that pasteboard receptacle into my own personal Batmobile. I went to town with an all out crayon assault — coloring, scribbling, emblazoning it with the closest approximation of the Batman insignia as I could — until it resembled The Batmobile, at least to my five-year-old imagination. I climbed in and sat down. Suddenly, Uncle Sidney, a burly fellow with arms like tree trunks, effortlessly lifted me and the box off the carpet and trotted across the floor, growling out “vvrrooom-vrrrrooom”  driving noises and simulating the motion of a superhero’s  car travelling at breakneck speed after an arch-enemy. After spinning in circles a few times, he deposited me — in my vehicle — on the top of the refrigerator for an aerial view of the tiny kitchenette.

As the Batman popularity took a stronghold on national pop culture, Uncle Sidney stepped it up on a personal level. One Friday evening, my mom took us out for dinner to the Cavalier Restaurant, a regular Northeast Philadelphia haunt for the Pincuses. During our meal, Uncle Sidney, who lived nearby, bounded in. He was so excited to tell us something, he could hardly contain himself. He told my mom he had something to show us outside. My mom smiled and watched as Uncle Sidney, as giddy as a six-year-old,  dragged my brother and me out to the the parking lot.

In the 1960s, convertibles were the coolest thing. What could be better than tooling across the open road at top speed with the wind whipping through your hair?! Nobody knew this better than Batman and my Uncle Sidney. Unfortunately, real-life technology had not yet caught up with TV technology. 60s convertibles, at least the one my Uncle Sidney purchased, had a real, solid glass  rear window that had to be zipped out and securely stowed before the soft top was retracted and roadway fun was enjoyed. I cannot stress enough how important this process was.

Once outside the restaurant, Uncle Sidney proudly waved his hand — with the finesse of a game-show model — towards a tank-like, white Pontiac. “Look!,” he began, “I just bought this! We’re gonna have fun!” He hopped in behind the wheel. “And watch this!” Uncle Sidney threw a switch on the car’s massive dashboard. In a symphony of mechanical whirrrs and grinding gears, the Pontiac’s roof came to life and began to fold back towards the rear of the vehicle. My brother and I marveled as my Uncle Sidney announced, nay, yelled, “It’s the Batmobile!”

Just then, our exhilaration was halted by a foreign, sickening sound. My Uncle Sidney’s face dropped. He recognized the sound before we did. In slow motion, he turned around — just in time to witness the rear window crack, compress and shatter, spitting zillions of pebble-sized pieces of glass across the trunk and around the car’s perimeter. My brother and I stood silent. Uncle Sidney, now behind the car and examining the colossal damage, alternately cursed and sobbed under his breath. He looked up at us.

We were cool with not telling Mom, but what difference did it make to Aunt Claire. Those two hardly knew each other.

In the following weeks and months, Uncle Sidney hid the now-missing window from his wife. On the rare occasions the two were together, the car top would always be down. He would drop her off at their apartment entrance and gallantly offer to park the car. Once parked, he would raise the roof and cover the open space with a blanket in case of rain. Aunt Claire was none the wiser. Until one night…

Aunt Claire was given a lift home by a cousin. They passed by Uncle Sidney’s car as they approached the apartment building. Claire pointed out, “Sid left the back window down.” and she asked Cousin if he could zip it back it, since it looked like rain was headed their way. Happily obliging, Cousin climbed in the back seat and zipped. And zipped. And zipped again.

“Aunt Claire,” he called out through the big gaping space, “there ain’t no window.”

He waved his extended arm in the void that would otherwise be occupied by glass. Aunt Claire was dumbfounded. She turned on her heels and marched right upstairs to have a little talk with her husband. Obviously the ‘window incident” was the last straw in a years-long conflict between my aunt and uncle. I remember seeing him only once or twice after that.

When my brother was in is early twenties, he was in Florida on a vacation. He had heard through various family discussions that Uncle Sidney had moved to Miami. One day on his trip, he located a Miami telephone directory and looked up Uncle Sidney. He found the only one in the book and dialed the number.  A man with a feeble and breathy voice answered. My brother instantly recognized the aged, but unmistakable voice of our beloved uncle.

“Hi, is this Sidney? This is Max Pincus. I’m in Florida and I’d love to see you.”

An audible gasp followed by an audible sob came across the line. “You have the wrong number.’ said the man and the line clicked dead.