This week, the Illustration Friday word is “mirror”. 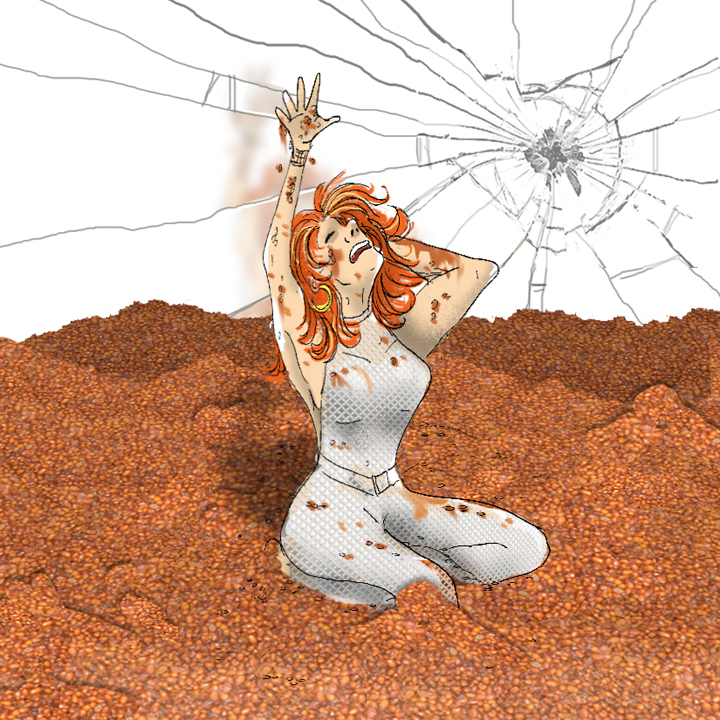 The coolest movie I ever saw was Brian De Palma’s Phantom of the Paradise.  It was a camp, over-the-top, rock and roll take on the Phantom of the Opera  … and I ate it up. The production was unbelievably low-budget. The songs, by prolific songwriter Paul Williams (who also starred as the malevolent Swan in the film), were just the right blend of cheery pop and contemporary glam-rock paired with slightly sinister lyrics. The acting was… well, what did I know?… I was 13.

Phantom of the Paradise  was soon unseated from the top position on my Cool Movies List in 1975. By then, I was 14 and my sensibilities had become more developed, my tastes more discerning. A friend and I ventured via public transportation, unaccompanied, to Center City Philadelphia. Our destination was The Arcadia Theater on Chestnut Street, in the center of a block of first-run movie theaters. We paid the inflated admission of $6.00 (we were used to paying a buck at the theaters in our Northeast Philadelphia neighborhood to see pictures that had been out for months) and headed inside to see Tommy.

The film was visually stunning. What it lacked in coherent plot it made up for in ocular stimulation. Considering there was no spoken dialogue, casting non-singing actors was a risky move on the part of visionary director Ken Russell. Oliver Reed, as Tommy’s step-father, delivered his songs with the strained voice of an uncomfortable novice, although he was the veteran of the Oscar-winning musical Oliver  only a few years earlier. Jack Nicholson also seemed out of place, singing his one featured song with an inexplicable British accent.

Although I have been a music fan since I was very young, I was not one bit familiar with The Who. I went to see Tommy  to see Elton John who, in 1974, was at the pinnacle of his career. I knew Tina Turner (who played the Acid Queen) from an appearance The Ike and Tina Turner Revue made on American Bandstand  one Saturday afternoon. I knew Eric Clapton (who played The Preacher) from that song on the radio about shooting the sheriff, but I knew nothing of his musical credentials. I had no clue who Pete Townshend and John Entwistle were or why the darkened theater erupted in wild applause at the first glimpse of the adult Tommy, played by Who lead singer Roger Daltrey.

Ann-Margret played Mrs. Walker, Tommy’s mother, despite being only three years older than Daltrey. I was familiar Ann-Margret from numerous Bob Hope specials, her scenery-eating role as Kim McAfee in Bye-Bye Birdie,  and, of course, her cartoon turn as “Ann-Margrock” in a memorable episode of The Flintstones  in which she posed undercover as Pebbles’ babysitter.  Ann-Margret, a seasoned recording artist, held her own even though her singing style was more suited for a Las Vegas showroom than rock anthems.

Ann-Margret’s most memorable scene in Tommy  was, arguably, during her rendition of “Smash the Mirror.” In this sequence, Mrs. Walker, living the high life as a result of her son’s fame as the new Pinball Wizard, laments that he can’t have enjoyment because he is deaf, dumb and blind. Frenzied and frustrated, Ann-Margret (as Mrs. Walker) clad in a skin-tight, white, chain-mail jumpsuit, flings herself around the plush, white confines of her bedroom. Suddenly, she hurls an empty champagne bottle at the television screen and the pristine room becomes flooded with laundry soap, beer, chocolate and baked beans. Let me tell you, watching hot 34-year-old Ann-Margret cheerfully wallow and writhe in a roomful of baked beans is an indelible image that has been etched into the mind of that 14-year-old that still lives in my  mind all these years later.

Ann-Margret was nominated for an Oscar for that role, probably for that scene alone. She didn’t win.

(I have seen Tommy numerous times over the past 37 years. It ain’t as good as I remembered.)