The 1963 movie Bye Bye Birdie was jammed with actors and actresses whose careers were flourishing. It also was the springboard for some about to start careers destined to be long and prosperous. Dick Van Dyke made his film debut in “Birdie”, a full year before his Golden Globe-nominated performance in Mary Poppins. Janet Leigh was fresh off her jarring albeit abbreviated performance in Hitchcock’s Psycho. The musical’s small role of Kim McAfee was re-written as a showcase for an up-and-coming young actress named Ann-Margaret. Paul Lynde, who was already an established Broadway actor, went on to a successful run as Uncle Arthur on Bewitched and center square on Hollywood Squares. Longtime stage actress Maureen Stapleton gained larger and more prominent movie roles for four decades. Even Bobby Rydell had a steadily thriving singing career. Birdie was also the big-screen debut for True Grit‘s Kim Darby and F-Troop‘s Melody Patterson.
And then there was Jesse Pearson. 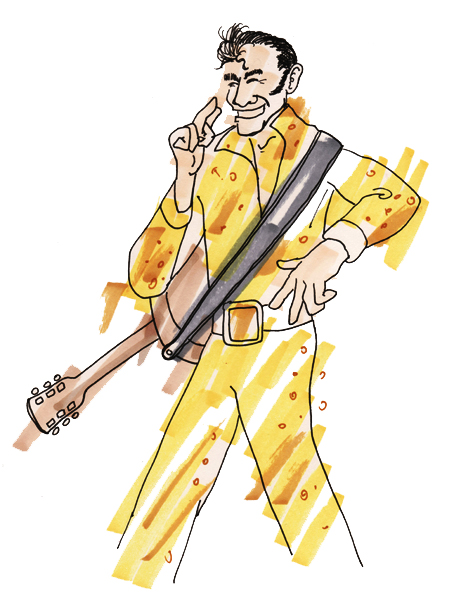 Jesse played the title role of Conrad Birdie. Birdie was a wildly popular rock and roll singer. He played guitar, wore gold lamé jumpsuits and attracted screaming teenage female fans in droves. Birdie was a thinly-veiled parody of Elvis Presley. After Bye Bye Birdie, Jesse found acting roles scarce. He narrated the 1966 recording of Rod McKuen’s “The Sea”. He made one-shot appearances several TV Westerns that were popular in the 1960s. He also reprised is Elvis-like turn in similar episodes of The Andy Griffith Show and The Beverly Hillbillies. Then, he disappeared into virtual obscurity, while his Birdie co-stars blossomed.
Jesse resurfaced in 1979, using the pseudonym “A. Fabritzi”, as the writer of two pornographic films.
Jesse passed away from cancer the same year his adult film career began.