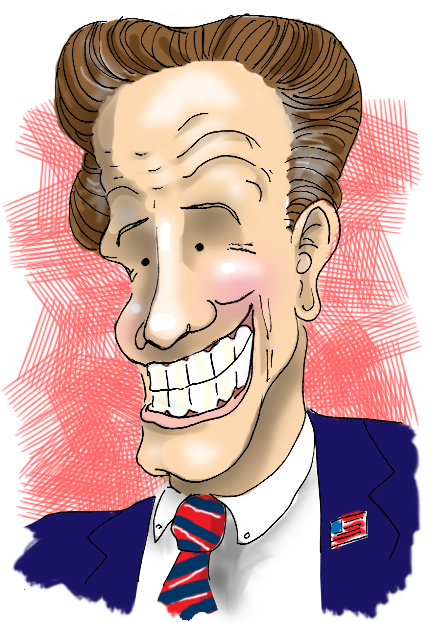 Let me start out by saying I’m not going to vote, so fuck you.

But, if I were  to vote, it would be for Barack Obama. Why? Not because of his political promises or his vision for the country or his plans for the economy. He’s probably full of shit, just like every politician before him. (I think that’s a prerequisite for becoming a politician.) But, I would vote for him simply because he seems like a nice guy. A real guy.  Like, a guy you’d like to be your neighbor. Running into him at the supermarket. Your kids playing with his kids. Out on a Saturday afternoon, mowing his lawn. Y’know… just a guy. I think the average American looks at Barack Obama and thinks, “Yeah, I can relate to him.”

But, Mitt Romney?!? Jesus Christ Almighty!  Who does he  represent? Who can possibly  relate to him? That asshole boss that fired you? That prick down at the bank that declined your loan application? The car salesman who smugly snickers when you are checking the stickers on a Mercedes, then gently steers you towards the Fords while he’s rolling his eyes? You’re damn right! That’s  who Mitt Romney is. He’s that guy you innocently start chatting with at a cousin’s wedding cocktail hour and find out that he’s a filthy rich, out-of-touch, never-worked-a-day-in-his-life, patronizing, elitist little fuck who, when the band starts playing, dances like a stiff-jointed white guy.

One question should be asked at the Presidential Debate and you’d make up your mind in fifteen seconds. Get the two candidates up on the stage and ask just one question  “You’re at work and your wife calls and asks you to pick up a loaf of bread on your way home. How much is that gonna cost you?” I will bet that Mitt Romney hasn’t a clue  how much a loaf of bread costs. Barack Obama? The guy went to a PETCO with his dog! His wife shops for laundry detergent at Target, for crissakes!  He goes on vacation and takes his daughters out for ice cream. Mitt Romney probably sends some domestic out to buy ice cream and says, “Here’s seven hundred dollars. That should cover it, right? Make sure you get vanilla.”