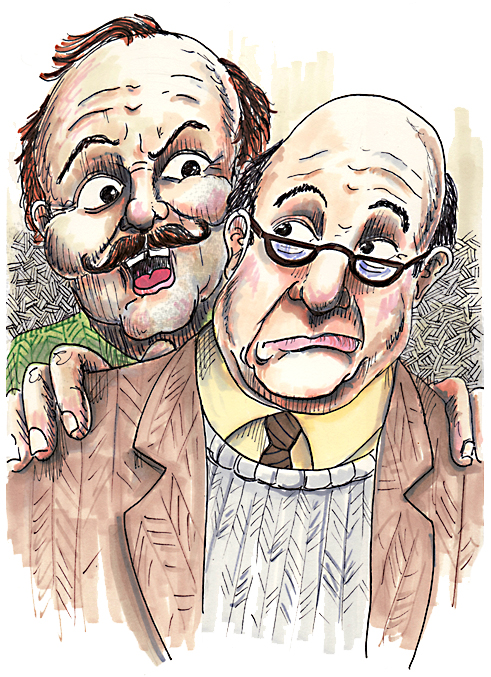 Roger C. Carmel and Richard Deacon were mainstays of episodic television from the 1950’s through the early 1980’s. Roger was best known for his role as intergalactic criminal Harry Mudd in two episodes of the original Star Trek  series. Roger made many one-shot guest appearances in TV sit-coms and dramas throughout his career, including memorable turns in Hawaii 5-0, The Munsters  and Hogan’s Heroes and a coveted spot on the hit show Batman  in 1967 as villain Colonel Gumm.

Richard Deacon acted in many anthology series in the late 50’s, including his role as Uncle Archie in Annette  opposite Disney darling Annette Funicello. Richard also made numerous guest appearances on television, once joking that he would say “Dinner is served” anytime, anywhere, alluding to his many roles as a butler or servant. He landed the part of blowhard Fred Rutherford, co-worker and nemesis to Ward Cleaver, on Leave It to Beaver. Richard was soon cast as the overbearing producer Mel Cooley on The Dick Van Dyke Show  in 1961 while still working on Leave It to Beaver. He split his time between the two programs for two years, until Beaver  ended its run.

In 1967, Desi Arnaz Productions presented a sitcom called The Mothers-in-Law  starring comediennes Eve Arden and Kaye Ballard as next-door neighbors who become unwilling in-laws when their children marry each other. Roger C. Carmel was cast as Roger Buell, Kaye Ballard’s husband. NBC and producer Desi Arnaz had high hopes for the series and, despite low ratings, renewed it for a second season. Desi informed the cast that NBC gave a five-year commitment to the show, but that previously promised salary increases were out of the question. Roger was infuriated and left. He was promptly replaced, without explanation (à la Darrin on Bewitched ) by Richard Deacon. Upon hearing of his replacement, Roger commented that “Deacon was a poor schmuck who always sold himself short.” Desi Arnaz appeared regularly in the second season as a retired bullfighter, securing another salary for himself in addition to his take as producer and director. NBC canceled The Mothers-in-Law  after the second season.

Richard Deacon continued to act regularly in a variety of roles, including dramas, comedies, anthologies and even a stint on Broadway in Hello Dolly  opposite the unlikely Phyllis Diller. Richard, a long-time gourmet chef and author of several cookbooks, hosted a microwave cooking show on Canadian television in the early 80’s. It was his last role, as he succumbed to the effects of heart disease and died in 1984 at the age of 63.

Roger C. Carmel didn’t have as easy a time securing acting roles after his dispute with Desi Arnaz. He struggled in his career, with small parts in a few sit-coms and the occasional cartoon voice-over (including the voice of Smokey Bear). He caught a break when he became the spokesperson for West Coast Mexican restaurant chain Naugles. He embodied the character of “Señor Naugles”, hoping to become the equivalent to Colonel Sanders. The gig paid well and Roger was able to fuel his long-time cocaine addiction. He died from an overdose (allegedly in the company of several male prostitutes) at the age of 54.