This week’s challenge on Monday Artday is “chicken”. 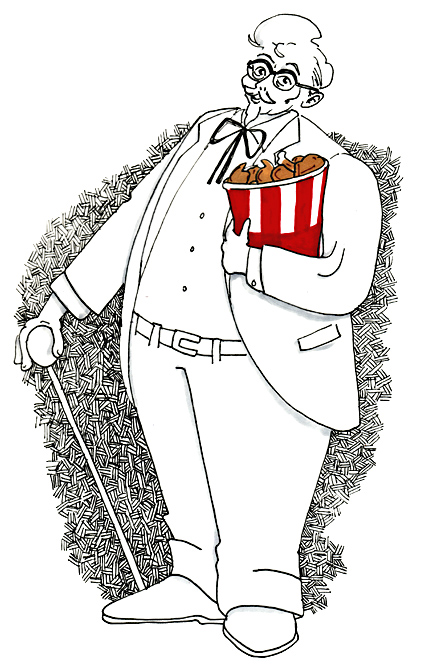 In 1930, Harland Sanders owned a gas station in Corbin, Kentucky. He would cook chicken dinners, using his own secret recipe, for travellers stopping to refuel. He served his customers in his living quarters in the service station. Through word of mouth, his local popularity grew, and Sanders moved his operation to a motel with a restaurant that seated 142 people. He still did all the cooking. Over the next several years, he developed a pressure fryer that allowed the chicken to be cooked much faster than by pan frying.

In 1935, Sanders was given the honorary title “Kentucky Colonel” by Governor Ruby Laffoon. Sanders chose to call himself “Colonel” and to dress in the familiar white suit and black string tie as a way of self-promotion.

In the middle 1960s, Sanders offered an adventurous young man named Dave Thomas the opportunity to turn around a failing Kentucky Fried Chicken restaurant. He helped save the restaurant by simplifying the menu. At the time, there was more than one hundred items on the menu. Working with Sanders, Thomas stripped the menu down to just the basic fried chicken and side dish salads. Thomas went on to found Wendy’s Old-Fashioned Hamburgers in 1969.

Sanders sold the Kentucky Fried Chicken corporation in 1964 for $2 million. The deal did not include the Canadian restaurants, so Sanders moved to Ontario and continued to collect franchise fees. Sanders and his likeness continued to represent Kentucky Fried Chicken. As its spokesperson, he collected appearance fees for his visits to franchises in the United States and Canada. In 1973, he sued the KFC parent company over alleged misuse of his image in promoting products he had not helped develop. In 1975, the company unsuccessfully counter-sued Sanders for libel after he publicly referred to their gravy as “sludge”.

Sanders died in Louisville, Kentucky, of pneumonia on December 16, 1980 He had been diagnosed with acute leukemia. His funeral service was attended by more than 1,000 people. He was interred at Louisville’s Cave Hill Cemetery, where he was dredged in eleven herbs and spices and served with biscuits and your choice of cole slaw or mashed potatoes.