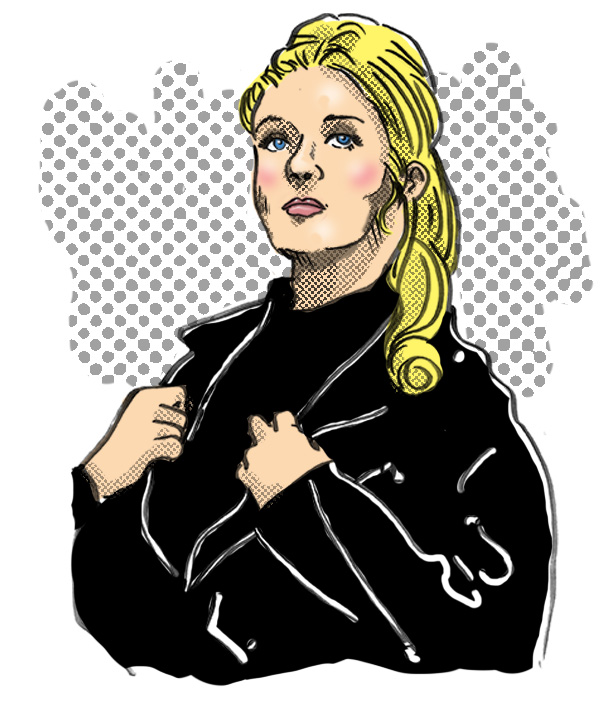 Alberta Nelson played “Puss,” one of the Rat Pack Gang members behind dim-witted leader Eric Von Zipper, as played by Harvey Lembeck, in seven “beach” movies produced by American International Pictures in the middle 1960s. Alberta, the tall, leather-clad blond, had only a few lines of dialogue, but she was the only actress to appear in all seven movies. Frankie Avalon and Annette Funicello didn’t even appear in all of them. Alberta played “Puss” in five of the films, “Muscle Girl Lisa” in the second “beach” film, Muscle Beach Party, and “Reject #12” in the classic Bond spoof, Dr. Goldfoot and the Bikini Machine starring Vincent Price at his campiest.

Alberta also had a four-episode run on The Andy Griffith Show. In the role of Mayberry Diner waitress Flora Malherbe, she first made a play for Sheriff Andy and then, in subsequent episodes, she became grease-monkey Goober Pyle’s girlfriend. In one memorable episode, she took over Goober’s job at the filling station when Goober went on vacation, only to gain huge popularity and increase business in his absence. In another episode, she helped fixit man Emmett secretly pick out a fur coat (how politically incorrect!) for his wife as an anniversary gift. Emmett’s wife saw their clandestine meeting and assumed Emmett was committing adultery with the pretty waitress. Kind of racy for 1968.

Alberta made her final screen appearance in the 1970’s low-budget exploitation film The Wild Scene, a sad career end to her wholesome screen image.