As I watched the 2009 baseball postseason, I thought about my long association with the Philadelphia Phillies. 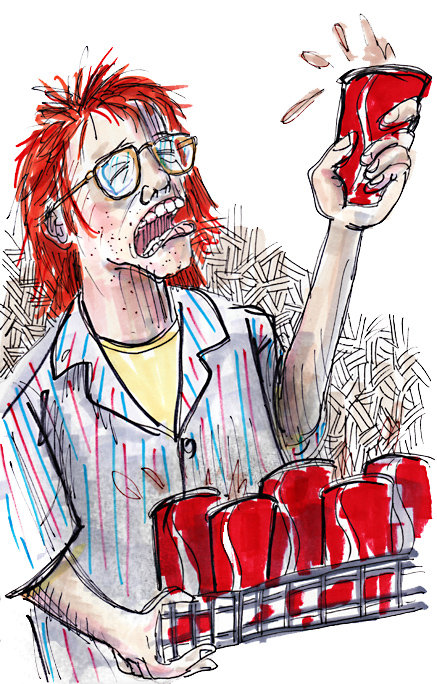 As a kid, I was never a sports fan. My brother and father would park themselves in front of the television and rabidly watch anything that remotely resembled a sporting event. Depending on the time of year, our house was filled with the sounds of kicked footballs, batted baseballs, whacked hockey pucks or basketballs swishing through nothing but net. There was always some sort of elimination round of some playoff of some series — punctuated by the heated and opinionated arguments between my brother and my father. I was usually off somewhere drawing. As far as I was concerned, one sport was just as boring as the next. But soon, all that would change.

In October 1977, I passed my driving test and was awarded a license to operate a motor vehicle in the state of Pennsylvania. I happily offered to run errands for my mom and drive friends around. I used any excuse I could think of in order to tool around Northeast Philadelphia in the most reliable of vehicles from the Pincus Family motor pool: my mom’s 1969 Ford Galaxie.

The Galaxie was a massive assemblage of steel and rubber that was sturdy enough for battle. It boasted a dashboard that looked like it belonged in commercial airplane. In what was obviously an exercise in poor planning, the radio was wedged into a most inconvenient corner space to the far left of the steering wheel. This gave only the driver control of the soundtrack for each ride.

The 1977 baseball season ended and the first place Phillies were once again denied a trip to the World Series, this time by cross-country rivals, The Los Angeles Dodgers. It was in that time between the 1977 Fall Classic and ’78 Spring Training that my brother gave me a valuable piece of advice, and probably the only piece of advice from my brother I ever followed. He suggested that I apply for a job at Veterans Stadium, home of the Philadelphia Phillies, as a vendor. It proved to be the greatest job I ever had.

In February 1978, baseball players began reporting to training camps throughout Florida. Meanwhile in Philadelphia, I obtained the necessary employment certificates allowing me to work, in compliance with Pennsylvania law. I borrowed the Galaxie and carefully navigated southbound Interstate 95, a thoroughfare I had only traveled once before, and that was while accompanied by a driving instructor. With my hands properly on the steering wheel at 10 and 2, I kept the car steady and as far to the right on the highway as legally possible. After a grueling forty-five minute ride (that should have taken twenty), I arrived at the 50 million dollar multi-purpose concrete structure that was known to locals as “The Vet.” I parked my car in the enormous lot and followed the signs towards the employment office. An uninterested woman with no inflection in her voice asked me some questions covering my age, where I attended school and how I heard about the job. She then directed me to another office that was empty except for an industrial-looking camera and a neutral photo backdrop suspended from a metal frame. I stood before the frame and smiled when cued. After several minutes, I received my laminated ID card and just like that I was officially a vendor for Nilon Brothers, the company that operated the food service at the stadium. I didn’t actually  work for the Phillies, so, unfortunately, I was not on the same payroll as Mike Schmidt. But, in sixty days, I’d eagerly return to hawk my wares amid the cheering crowd of baseball faithful.

My brother and a number of his friends had worked as vendors for five years prior. I was welcomed to the fold as long as I could provide transportation to the ballpark as part of a carpool. I committed and was welcomed once again, this time more sincerely. Arrangements were made and I was to drive a car full of my brother’s buddies to The Vet every fifth home game or when needed.

It was unseasonably cold the first week of April in Philadelphia, but that didn’t keep the 1978 baseball season from starting. I got a call from one of my fellow vendors informing me when to be ready for pickup for Opening Night. A car packed with my brother’s friends pulled up in front of my house. A horn honked as my signal to join them in seconds or be left behind. I scurried down the front lawn, and climbed into the back seat, squeezing between two hulking college seniors. They were anxious to start the new vending season, as they had all turned 21 and were now legally permitted to sell beer. That’s where the real money was.

The policy of vending for Nilon Brothers was this: Vendors essentially worked for themselves, meaning there was no salary. A vendor would arrive at the stadium several hours before a game and queue up for admittance. Once the vendor entrance opened, one would proceed to what we called “the laundry.” It was a counter where a man sat and distributed smocks in exchange for your ID badge and ten bucks. The smock was a red, white and blue-striped pajama top that identified you as an authorized Nilon employee. I suppose Nilon felt that carrying a tray of foodstuff and screaming one’s head off was not enough to allow for proper recognition. At the end of the night, once your smock was returned (no matter how soiled or sweat soaked), you would receive your ID and full deposit. After putting on the clown-like smock and tying on your own supplied change apron, vendors would head to one of four vendor-only commissaries placed strategically throughout the stadium. I, and my carpool colleagues, worked out of commissary 535 in the right field upper deck. The commissary was set up like a cafeteria. There were sections for each product – soda, peanuts, beer – from which a vendor choose his item for the night. I sold Cokes, which were dispensed in waxed cups and arranged in wire trays of twenty. A tray of Cokes was purchased by the vendor – that’s right, purchased – for $14.25. Different products cost different amounts and, therefore, offered different profit margins. With a catchy “call” and swift feet, a tray of twenty Cokes at eighty cents apiece brought the vendor $16.00 – and a profit of a buck seventy-five. An average summer game would net about thirty-five dollars, a huge sum to a seventeen-year old. On a really good day, fifty bucks could easily be made, if a fair amount of hustling was involved. Rain delayed games were great because there was a captive audience, no game and nothing to do but buy food. Vendors loved rain delays. Oh yeah, vendors had to provide their own change. Aside from a workplace, Nilon Brothers provided shit.

My first night of vending was exciting and I was ready to vend. However, after toting a heavy metal tray laden with twenty, ice and soda-filled cups up and down steep, cement steps into the dizzying heights of the 700 level, I was dragging my ass. The tray weighed a ton and, due to the chill in the air, Cokes werent exactly a hot commodity. As baseball season went on and the weather got warmer, vending blossomed into a great experience. I hustled through the crowds, deftly tendering two dimes for every dollar I received for a Coke. I perfected my attention-getting call of “Heeeeeeyyyy! Coooooooo-ke He-YAH!” as I worked the bleacher throngs. The camaraderie among most vendors was great. I acknowledged the other vendors I passed with a wink, as though we were part of a secret club. There was McKenna, a geeky string bean with thick glasses and his unmistakable call of “Give your tongue a sleigh ride!” when he sold ice cream. There was old Charlie Frank, a legend among the elite clutch of hot dog vendors, with his rapid-fire call of “DoggieDoggieDoggieDoggieDoggieDoggie.” There was my brother’s pal Scott, another hot dog vendor, who served up two dogs on one bun, affectionately called a “Scott-dog.” Since hot dog sales were tallied by the roll inventory, this treat was not uncommon, but only available to vendors.

Nilon Brothers didn’t care much for competition. Enterprising, yet unauthorized, street vendors that set up on bordering Pattison Avenue infringed on Nilon’s high-priced fare. Besides that, they were vending illegally on private property. Each night, policeman would systematically confiscate shopping carts filled with Philly soft pretzels from some rogue salesman. The offender would be chased from the premises and his offerings carted into the bowels of some stadium storage area. Those storage areas were adjacent to the vendor laundry. One night at the seventh-inning vendor departure time, as a group of us were returning our smocks, a voice from behind inquired, “Are these pretzels for anyone?” We turned around to see Jim Lonborg, the lanky Phillies pitcher, who had just gotten pulled from the evening’s game. Upon receiving several shrugs from the cluster of vendors, Lonborg grabbed a strip of eight baked-together pretzels, jammed them into the webbing of his glove and headed off to hit the showers.

The drives home from the game were an adventure as well. If I was a passenger, I was usually relegated to the back seat where I had to survive the smell of at least five of my brother’s friends, all sweaty and tired, but charged with adrenaline. If I was the evening’s driver, I had to maneuver around the ancient train tracks that littered Delaware Avenue, while deflecting the passenger trying to reach through my steering wheel in an attempt to change the radio station. When I’d get home my parents would ask who won. “Who won?,” I’d reply, “I don’t even know who was playing. I was too busy making money.”

On October 1, 1978, along with the Phillies season, my career as a vendor came to an end. The weather had turned cold and I needed to secure a job that lasted more than a few months.

In 1996, I began my tenure as a Phillies season ticket holder. With the package we purchased, my family began attending every Sunday home game the Phillies played. Today, as my wife and I sit in the stands of Citizens Bank Park, the new home of the Phillies, there are several vendors ambling through the crowd that I recognize thirty-one years later. Their calls are raspier and their gaits lethargic, but they are unmistakably the same guys. It seems sad to me that men of advanced age are still working the ballpark mobs. I suppose they don’t want to give up the greatest job they ever had.