This week’s challenge word on the Illustration Friday website is “burning”. 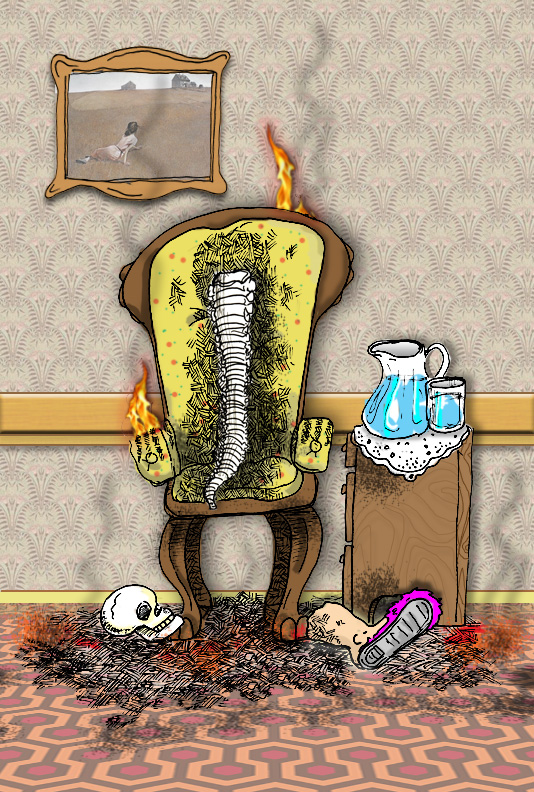 At 2 AM on July 2, 1951, Pansy Carpenter smelled something burning. She checked on the finicky water pump in her apartment building’s basement, since it had a tendency to overheat. Concerned for the safety of her tenants, she turned the pump off and went back to sleep. At 8 AM, a telegram delivery boy woke Pansy with a delivery for Mary Reeser, a tenant in the building. Pansy knocked on Mary’s apartment door but no one answered. She grabbed the doorknob and it was unusually warm. Panicked, Pansy ran out of the building for help. She flagged down two house-painters who were working nearby. They forced their way into Mary’s apartment and were nearly overcome by the blast of heat when the door opened. Pansy and the painters discovered the remains of Mary’s favorite chair, covered in ash and still smoldering. A small, circular area surrounding the chair was charred and smoking and covered in soot and ash. A left foot, still intact and still wearing a slipper but burnt off at the ankle, a fused column of vertebrae and a heat-shrunken skull were all that remained of Mary.

The apartment showed signs of intense heat. Plastic switch plate covers were melted and mirrors were shattered. Soot covered the walls above the four-foot mark. Below four feet, the room was untouched by damage, except for the small area around Mary’s chair.

An investigation by St. Petersburg Florida Police revealed no signs of gasoline or similar accelerants. The electrical outlets melted after the fire started, so that was not the source. A stray cigarette igniting clothing could not have generated the heat to cause the full cremation of Mary’s body. At the request of the local police, an FBI investigation determined that Mary had fallen asleep while smoking, and that the extensive damage to her body was due to the “wick effect,” a phenomenon where the clothing of the victim soaks up melted fat and acts like the wick of a candle. The police disagreed. They were convinced it was a case of spontaneous human combustion  that Mary had just burst into flames.

Her cause of death remains a disputed mystery.