The current challenge on Monday Artday is “the old west”.  In addition to my finished illustration, I included my original pencil sketch. (I showed a pencil sketch once before on this post.) Coincidentally, almost two years ago, I did this drawing when another illustration blog posed the same challenge. 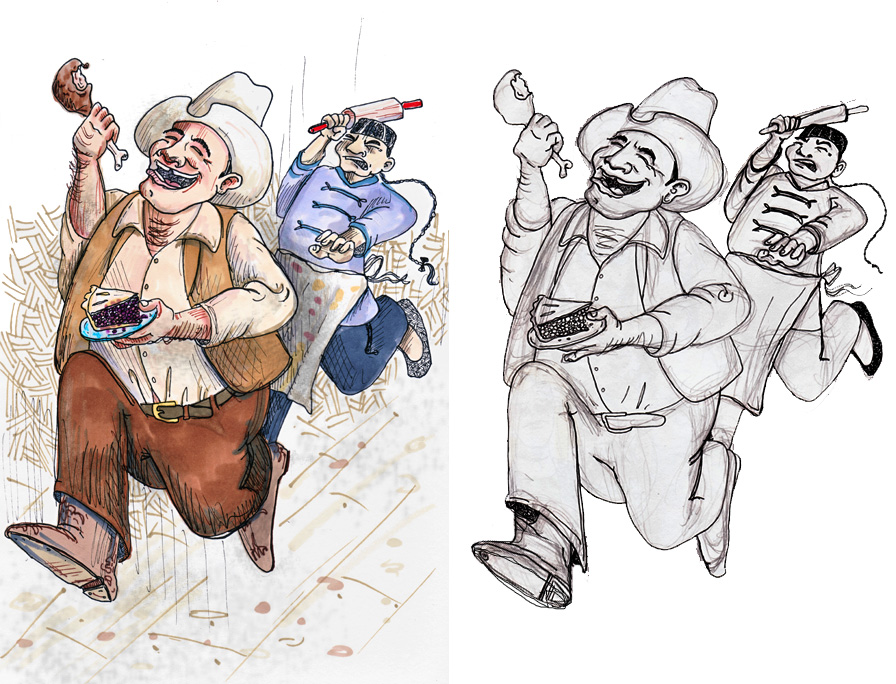 When I did an illustration for “the old west” in 2007, I presented a rather somber subject. This time, I’m taking a more light-hearted route. Well, it has a terrible ending, but there’s some fun before I get there.
Bonanza was one of television’s longest running series, entertaining loyal audiences for 14 seasons. As far as the show’s ratings, it finished in the top 10 for ten of those seasons.

My parents watched Bonanza, although they liked Gunsmoke better. (My brother is named after Marshal Dillon.) Recently, I’ve been watching episodes of Bonanza on TV Land in between episodes of The Andy Griffith Show. After watching the adventures of the Cartwright clan, I have come to a revelation. Every show was identical and it was a totally unrealistic portrayal of the old west. Bonanza presented the trials and tribulations of patriarch Ben Cartwright and his three sons from three different mothers. There was the eldest Adam, the gentle giant Eric (known as Hoss) and hot-headed Little Joe, the youngest. The stories were formulaic. Someone tries to do the Cartwrights wrong or tries to frame one of the four family members for murder. There’s a gunfight, a fistfight or one of the four gets wounded within inches of their life. But, approximately forty-seven minutes pass and everything is back to normal. Pernell Roberts, who played Adam, left the show in the sixth season. Lorne Greene and Michael Landon, who played Ben and Little Joe respectively and stayed with the series through its entire run, had continued success after Bonanza’s cancellation. Greene and Landon eventually ended up together here.

Dan Blocker, who played middle son Hoss, was as vastly different from his character as he could be. Hoss was written as “lovable but slow-witted,” however Blocker was the only cast member with an advanced college degree. Prior to embarking on an acting career, Blocker was a high school English teacher, a rodeo performer and a bouncer. He was actively persued by director Stanley Kubrick for a role in Dr. Strangelove. When Blocker declined, the part went to Slim Pickens. Blocker was a shrewd businessman and invested wisely. He received partial ownership in a successful chain of Ponderosa/Bonanza steakhouse restaurants in exchange for serving (in character as Hoss) as their commercial spokesman and making personal appearances at franchises. In 1972, Blocker died suddenly at age 43 of a pulmonary embolism following routine gall bladder surgery. The cast and crew of Bonanza were shaken by his death, and the writers took the then-unusual step of making Hoss’ death part of the show’s storyline that autumn.

Victor Sen Yung played Hop Sing, the Cartwright’s cartoonish houseboy and cook. It was one of the most poorly written, one-dimensional and racist characters in TV history. Hop Sing was constantly taunted by Hoss and their relationship was played for comic relief. Sen Yung, in real life was an excellent cook, and in 1974 authored The Great Wok Cookbook. Prior to his role in Bonanza, he was Charlie Chan’s number two son, Jimmy, to Keye Luke’s number one son, in eleven films in the 1940s. In 1972, a Pacific Southwest Airlines plane on which Sen Yung was a passenger was hjiacked. The FBI assaulted the hijackers, and in the ensuing gunfire Sen Yung was shot in the back. He and another wounded passenger survived, but a third passenger and the two hijackers died. A year after the well-publicized incident, he appeared on To Tell The Truth and related the events of the hijack. With Sen Yung dressed in a sport coat and flanked by two dissimilar impostors, none of the four panelist were able to choose him as the character actor, although he appeared on one of the most popular weekly TV shows of the last decade.

In the late 1970s, he did promotional cooking demonstrations in department stores across the country. In 1980, Sen Yung was creating clayware and curing the items via an oven in his home in North Hollywood, and died of carbon monoxide poisoning.