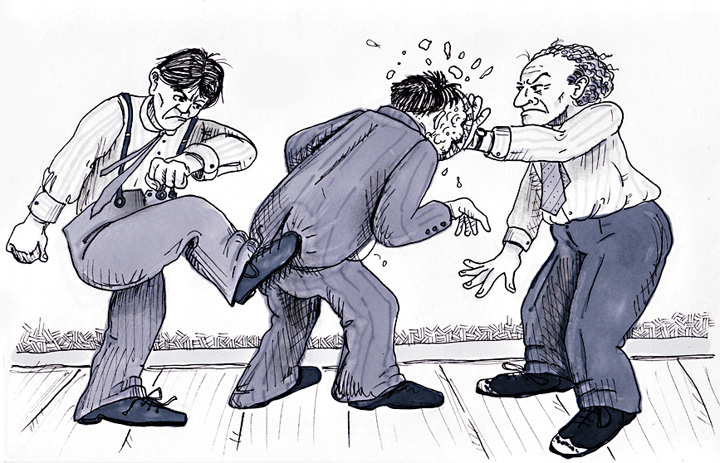 On November 22, 1955, while returning home by taxi from attending a boxing match, Samuel “Shemp” Howard, of the Three Stooges, died of a massive heart attack. Shemp was lighting a cigar after telling a joke when he suddenly slumped over. The Stooges still had four more shorts to film in order to fulfill their contract with Columbia Pictures. Producer Jules White recruited longtime Stooge supporting actor Joe Palma to fill in for the late Shemp. Through editing, redubbing and strategic staging  that ranged from clever to horribly patchy  White made good on the studio’s contract.

The four final shorts, Rumpus in the Harem, Hot Stuff, Scheming Schemers and Commotion on the Ocean, were remakes of earlier Stooges one-reelers. White shot new scenes with surviving Stooges Larry Fine and Moe Howard, Shemp’s younger brother. Joe Palma appeared in these new scenes usually filmed from behind or with some prop blocking his face. One scene even had Moe, Larry and Joe Palma wearing beards as part of the storyline. Shemp’s limited dialogue was lifted from previous films and dubbed onto the soudtrack.

In Commotion on the Ocean, Moe and Larry slyly discuss the mysterious whereabouts of Shemp. Moe asks, “I wonder what became of that Shemp?” Larry answers, “You know he went on deck to scout out some food.” “Oh, yeah. That’s right.”, replies Moe.

Palma spent his last years in the entertainment industry as an assistant to Jack Lemmon. He appears as “Mr. Palma,” the mailman, in Lemmon’s 1964 Columbia comedy Good Neighbor Sam. His final film appearance was as a butcher in Lemmon’s 1968 Paramount film The Odd Couple. He died of natural causes on August 14, 1994.

The term “Fake Shemp” was adopted by director Sam Raimi and can be found in the credits of his Evil Dead films, as well as other movies.