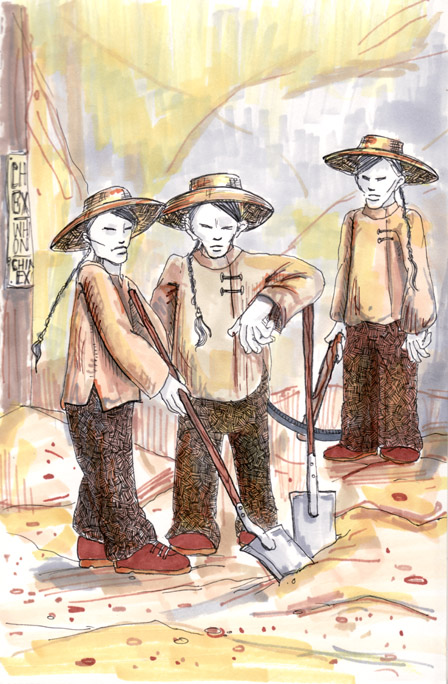 This week’s word(s) at sugarfrostedgoodness.com is “old west“. The heyday of the American “Old West” was roughly the time between the years 1865 to 1890. These times bring to mind romantic stories of cowboys and gunfights, of John Wayne and Roy Rogers, of saloon dancers and wagon trains. But this is a Hollywood version of the “Old West”. There is another “Old West” that this country would rather forget.
The Transcontinental Railroad was completed in 1869. It was the beginning of a nation-wide linking of railways. It was a major factor in the building and strengthening of the United States. Because it was such a massive undertaking, laborers were scarce. Thousands of Chinese immigrants, who came to the US during the Gold Rush in 1849 and had a reputation as hard workers, were recruited by the railroad companies to build the railroads. The Chinese were hired to keep labor costs down, as they were paid about one-third of white laborers’ salary. Plus, they had to provide their own food and pay for their own living expenses, benefits that were covered for the white workers by the railroad companies.
Thirteen thousand Chinese workers dug tunnels and laid track for half of the Transcontinental Railroad. In photos and illustrations depicting the “Golden Spike” ceremony at Promontory Point, Utah, the site of the joining of the East and West railroad, the Chinese are conspicuously absent.

As a reward and thanks for Chinese efforts, the United States passed the Chinese Exclusion Act of 1882. This act outlawed all Chinese immigration to the United States and denied citizenship to those already settled in the country. Official discrimination extended to the highest levels of the U.S. government: in 1888, U.S. President Grover Cleveland, who supported the Chinese Exclusion Act, proclaimed the Chinese “an element ignorant of our constitution and laws, impossible of assimilation with our people and dangerous to our peace and welfare.”