The illustrationfriday.com challenge this week is “subtract”. 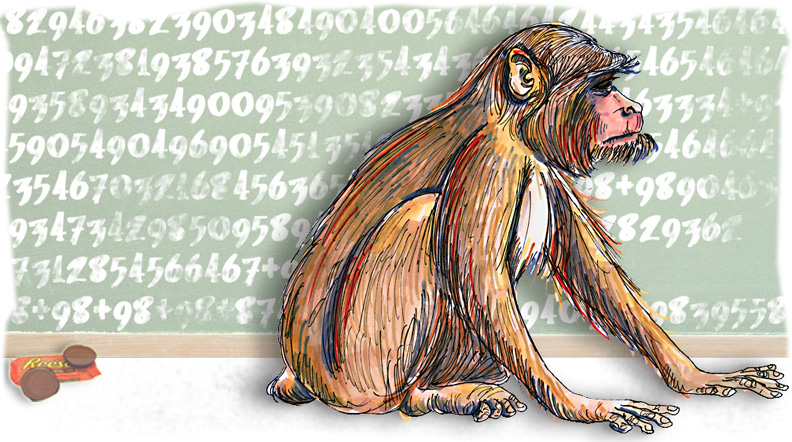 I read the following article in National Geographic Magazine in February 2009:

Monkeys Can Subtract, Study Finds
February 18, 2009
Add this to the growing list of reasons humans aren’t so special, after all: Monkeys can subtract.
The discovery marks the first time a nonhuman species has been seen having “widespread success” with subtraction, scientists announced last Thursday. A group of Rhesus macaques placed in front of touch screens in a Duke University laboratory were able to subtract dotsnot by counting them individually but by using a more instantaneous ability researchers call “number sense”.
In each session a monkey was presented with a number of dots. Next, a large square would hide all the dots. Then some of the dots would glide off the screen from “behind” the shape. Only the big square, with the remaining dots “hidden” behind it, would be left on screen.
Finally, decision time: Two groups of dots would appear on screenone of them the correct number of remaining dotsand the monkey would indicate its answer to the math problem by touching one of the groups. Each correct answer was worth a serving of Kool-Aid.
In the vast majority of trials, the monkeys chose the right answer without counting, said psychologist Jessica Cantlon, who co-led the studies at Duke. Speaking before an American Association for the Advancement of Science meeting in Chicago, Dr. Cantlon said, “In fact, college students used as controls in the study had the same success rate as the macaqueseach group choosing the correct answer in as little as a second. Such similarities ‘suggest that these abilities are part of a primitive system for reasoning about numbers that has been passed down for millions of years of evolutionary time.'”
After the study concluded, Dr. Cantlon and her staff slaughtered and consumed the primates. The monkeys were prepared in several different ways, including stews, casseroles and barbecue.
Because there’s no wrong way to eat a Rhesus.