The illustrationfriday.com challenge word this week is “seed”. 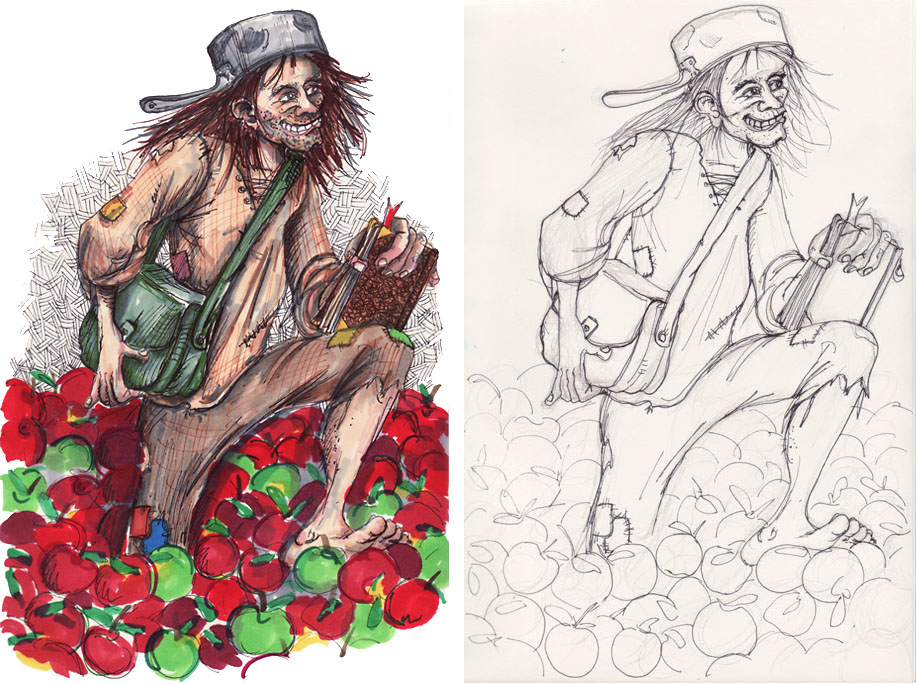 John Chapman was an American pioneer nurseryman. He picked apple seeds from the discarded remains from cider mills in Pennsylvania and travelled across Pennsylvania, Ohio, Indiana, and Illinois, planting apple trees. He became an American legend because of his kind and generous ways, his great leadership in conservation, and the symbolic importance of apples. He came to be known as “Johnny Appleseed”.

The popular image of Johnny Appleseed had him spreading apple seeds randomly. However, he planted nurseries rather than orchards, built fences around them to protect them from livestock, left the nurseries in the care of a neighbor who sold trees on shares. Appleseed’s “caretakers” were asked to sell trees on credit, if at all possible, but he would accept corn meal, cash or used clothing in barter. Johnny Appleseed dressed in the worst of the used clothing he received, giving away the better clothing he received in barter. He wore no shoes, even in the snowy winter. There was always someone in need he could help out, for he did not have a house to maintain. He spent a good portion of his time traveling from home to home on the frontier. He would tell stories to children, spread the Swedenborgian gospel (“news right fresh from heaven”) to the adults, receiving a floor to sleep on for the night, sometimes supper in return. He would often tear a few pages from one of Swedenborg’s books and leave them with his hosts. He made several trips back east, both to visit his sister and to replenish his supply of Swedenborgian literature. He typically would visit his orchards every year or two and collect his earnings.

Johnny Appleseed’s beliefs made him care deeply about animals. His concern extended even to insects. One cool autumn night, while lying by his campfire in the woods, he observed that the mosquitoes flew into the fire and were burnt. Johnny, who wore a tin pot on his head, which served as both as a hat and a cooking vessel, filled it with water and quenched the fire. He remarked, God forbid that I should build a fire for my comfort, that should be the means of destroying any of His creatures.

It has been speculated that Johnny may have had Marfan Syndrome, a rare genetic disorder. One of the primary characteristics of Marfan Syndrome is extra-long and slim limbs. All sources seem to agree that Johnny Appleseed was slim, but while other accounts suggest that he was tall, Harper’s Magazine described him as “small and wiry.”

Those who propose the Marfan theory suggest that his compromised health may have made him feel the cold less intensely. His long life, however, suggests he did not have Marfan’s, and while Marfan’s is closely associated with death from cardiovascular complications, Johnny Appleseed died in his sleep, most likely from pneumonia.

Despite his charity, Johnny Appleseed left an estate of over 1,200 acres of valuable nurseries to his sister, worth millions even then, and far more now. He could have left more if he had been diligent in his bookkeeping.

In addition to my illustration, I have included my original inked pencil sketch, before I added color.