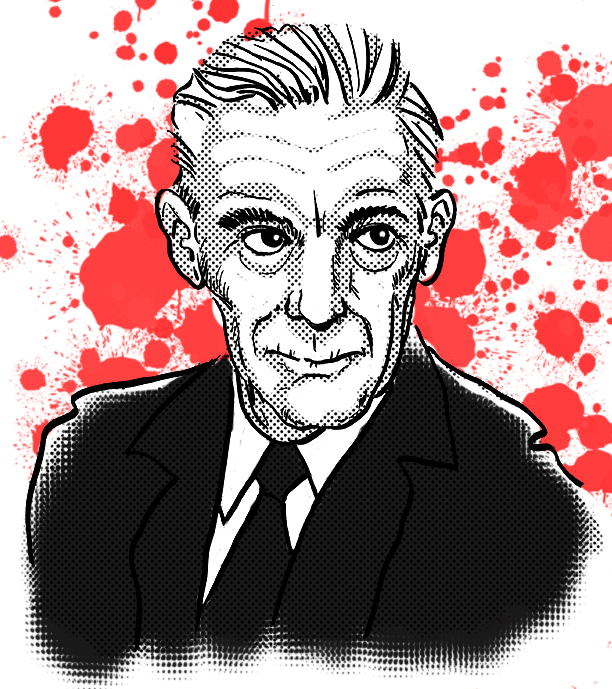 Here we are again! October! And Inktober is once again upon us. That means it’s time for hundreds of talented artists worldwide… and me…. to create special works daily just for October, based on a set of suggestions from the official Inktober website. And once again, I’ll be making up my own rules of participation. I will be posting a new, black & white drawing each week for the entire month – in addition to my participation in the regular Inktober 52 and a Dead Celebrity Spotlight plus a “retro movie poster that never was“…and, if I feel like it, another random drawing here and there. Every year, I choose a theme in keeping with the “spirit” of the Hallowe’en season. This year, my drawings will be a tribute to one of the immortal actors that made horror movies the chosen genre in which to ply their craft.

I’ll start things off with the great Boris Karloff. Born William Pratt in 1887, he adopted a more intriguing stage name and appeared as a bit player in dozens of silent films in Hollywood’s early days. Actually, Boris acted in nearly one hundred films before being cast in his iconic role as the monster in James Whale‘s 1931 classic Frankenstein and its subsequent sequel The Bride of Frankenstein. He took roles in other horror films until the genre fell out of favor with the movie-going public. He appeared in non-horror films including mysteries like the Charlie Chan series and suspense like Dick Tracy serials. He returned to horror when its popularity resurged. He starred in a number of horror films well into the 50s and 60s, working with directors like Val Lewton and Roger Corman. Boris moved into television as the host of the anthology program Thriller. He spoofed his malevolent persona as the narrator of the animated holiday classic How The Grinch Stole Christmas and in the film The Ghost in the Invisible Bikini in 1967, his last role.