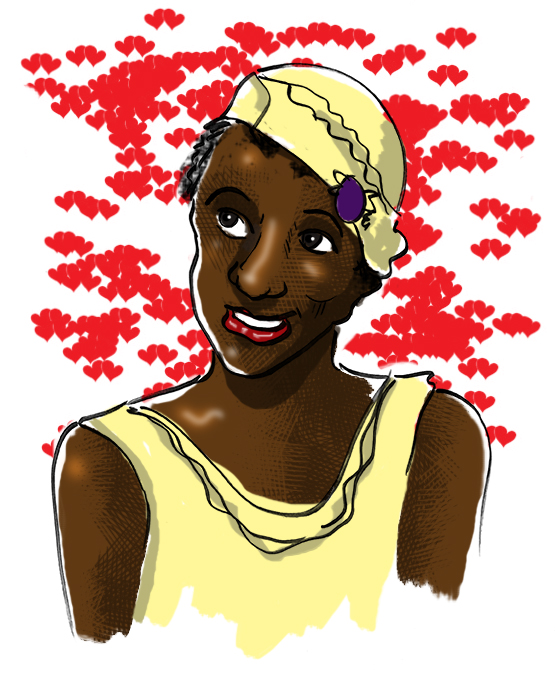 In 1930, animator Max Fleischer released the cartoon short Dirty Dishes, featuring a sexy, anthropomorphic French poodle, drawn by staff artist Grim Natwick. The character sang the song “Crazy Town,” which was augmented by a few “boop-boop-a-doo”s. In subsequent cartoons, the character was refined by studio animators Seymour Kneitel and Berny Wolf and soon became “Betty Boop” and scat-singing became her trademark. Audiences were wild for Betty Boop… except for singer Helen Kane.

Helen Kane was a jazz-singing flapper, performing regularly in vaudeville. She appeared on stage in the early 1920s. A few years after her debut, she appeared in a musical called A Night in Spain. In the show, Helen sang “That’s My Weakness Now,” and ad-libbed a bit of scat-singing… specifically “boop-boop-a-doo.” Audiences loved it and Helen became a star overnight.

As the popularity of Fleischer’s Betty Boop grew, Helen filed a lawsuit against the studio. Her suit claimed that Betty Boop was a deliberate caricature of her, created unfair competition, and had ruined her career. The lawsuit was brought to trial in 1934. During the course of the trial, it was revealed that Helen Kane actually stole her entire act after seeing “Baby Esther” Jones, a ten-year-old singer, perform in a Harlem nightclub. An early sound film was shown in the court room and Judge Edward J. McGoldrick watched closely. Baby Esther’s singing, mannerisms and her “boop-boop-a-doo”s were all the convincing the judge needed. He ruled, “The plaintiff has failed to sustain either cause of action by proof of sufficient probative force. In my opinion, the ‘baby’ style of singing did not originate with Helen Kane.” The case was dismissed and Helen was disgraced.

Baby Esther Jones, however, toured Europe. She performed for royalty in public and private shows. Despite her age, Baby Esther was touted as a miniature Josephine Baker. After Europe, Baby Esther was welcomed to South America, where her talents were lauded all over Brazil. She returned to the United States in 1930, where she headlined with Cab Calloway.

Baby Esther fell out of the public’s favor as she grew older. She was replaced in the spotlight by other black child singers. Baby Esther retreated into obscurity. She passed away, but it is unclear exactly when. She has been referred to by jazz scholars and aficionados as “Betty Boop’s black godmother.”