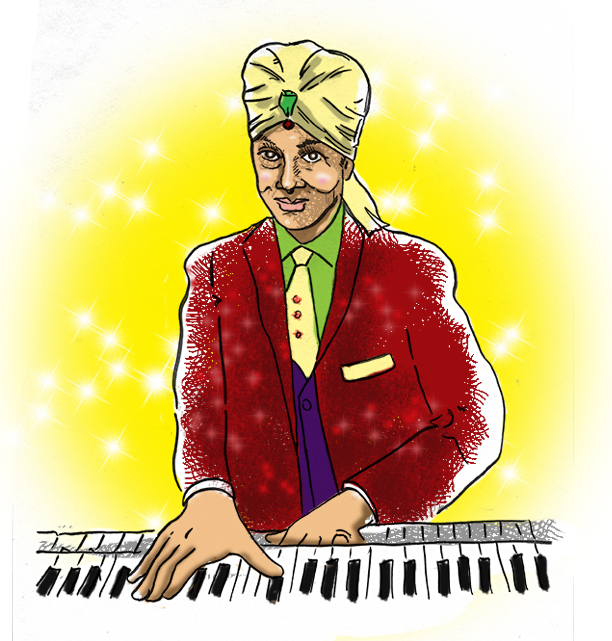 Korla Pandit was a pioneer in the musical genre known as “exotica.” He played the Hammond organ and grand piano, giving a new, otherworldly life to standard tunes like “Over the Rainbow,” adding rapid runs, unusual breaks, and piano intermezzo. Beginning in 1949, Korla Pandit’s Adventures In Music was featured on Los Angeles’ KTLA. Korla would sit silently at his keys and, for the duration of the fifteen-minute program, play a variety of musical numbers while staring intently at the camera. An off-screen narrator would introduce the maestro as hailing from New Delhi, India, the son of a French opera singer and an Indian Brahmin government official. As his popularity grew, Korla was befriended by Hollywood stars like Errol Fynn and Bob Hope and he appeared in several films including The Thief of Bagdad.

Except Korla Pandit was living a lie.

In reality, Korla Pandit was, in fact, John Roland Redd, an African-American born in St. Louis, the son of a Baptist preacher. He adopted the Indian persona at the suggestion of his wife, Disney animator Beryl DeBeeson. The couple married in Tijuana , Mexico, as interracial marriages were prohibited in the United States. Exploiting his light complexion, first John used the name “Juan Rolando” before changing to the more exotic “Korla Pandit” and passing himself as Indian. He and his wife concocted a backstory and they fashioned a flashy wardrobe to complete the illusion. Korla kept up his appearance at all times — both on camera and off. His family would come to see his perform, but never speak to him. He would visit them, in full “costume,” but did so covertly and never with his wife or children.

In 1967, Korla and his family moved to British Columbia to avoid his sons being drafted into service in the Vietnam War. He performed in clubs in the late 70s in San Francisco, where he began to speak, delivering mystic messages of a somewhat spiritual nature. With his television popularity on the decline, he performed anywhere that would hire him — including pizza shops, department stores, supermarkets and car dealerships. He did experience a slight resurgence in popularity during the “Tiki music” revival of the 1990s. Korla even had a brief cameo in the Tim Burton biopic Ed Wood in 1994 and recorded with the Southern California punk band The Muffs.

Korla succumbed to a heart attack in 1998 at the age of 77. His children were unaware of their father’s true identity and heritage until after his death. His son, John, actually debated the truth.