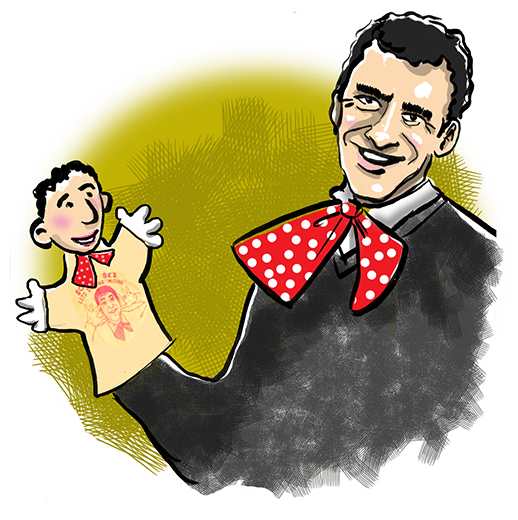 I did this drawing for my friend Kathy. Kathy, who is the long-time host of a popular children’s call-in show on a local Philadelphia radio station, has single-handedly kept the memory of Soupy Sales alive for a generation that would, otherwise, have no interest in the late comedian.

Soupy Sales, born in North Carolina as Milton Supman, was a popular radio and television host, whose simplistic brand of broad, slapstick humor made him a wildly popular character in the 1950s through the 70s and 80s. Top celebrities, like Duke Ellington. Frank Sinatra, Jerry Lewis, Judy Garland and Sammy Davis, Jr. all clamored for a shot at appearing on his show. The pinnacle of a guest appearance on Soupy’s show was the honor of being hit with a cream pie in the kisser, Soupy’s signature stunt. As Soupy’s popularity grew, he soon was featured in movies, television series and game shows. Soupy recorded albums on Frank Sinatra’s Reprise Records label and even appeared on The Ed Sullivan Show in 1965, just prior to The Beatles’ performance.

Kathy, who was an early fan, was close to Soupy and eventually became “the daughter he never had.”  Thanks to Kathy’s on-air efforts, Soupy Sales has found a new and appreciative audience.