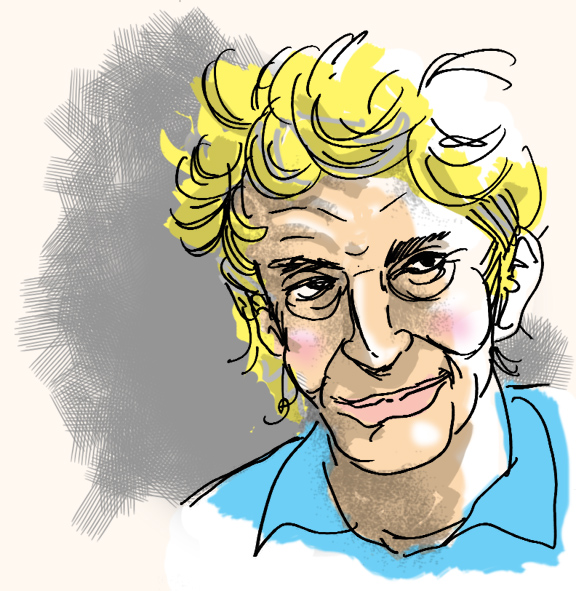 Peter Watts became the road manager for Pink Floyd in 1967, a few months prior to the departure of band founder Syd Barrett. (In December 1967, guitarist David Gilmour was signed on to take Barrett’s place.) According to an interview, Peter was responsible for “getting everything together onstage, so all the guys have to do is walk onto the stage and play.”

Peter is featured on the back cover of Pink Floyd’s 1969 release Ummagumma. He and roadie Alan Styles are pictured on an airport runway surrounded by every piece of the band’s sound and stage equipment. The mixing boards, speakers, cables and instruments are arranged to mimic the “exploded-view” schematics of military aircraft.

In 1972, during the recording of the ground-breaking Dark Side of the Moon at Abbey Road Studios, Pink Floyd bassist Roger Waters compiled a series of questions. With the studio recorders going, he posed questions like “What’s your favorite color?” and “What’s your favorite food?” to the more serious  “When was the last time you were violent?” and “Were you in the right?”, as a quick follow-up. He asked his questions to crew members and their families, doormen, even Paul McCartney and Wings who were also at the studio working on an album. Although, Paul’s answers were all dismissed as “trying too hard to be funny,” faithful road manager Peter Watts contributed the eerie laughter heard at the beginning of “Speak to Me” and “Brain Damage” (during the lyric “The lunatic is on the grass”). Peter’s second wife Patricia can be heard saying, “He was crusin’ for a brusin’ ” during the fade-out of the song “Money,” as a reference to Peter’s temper.

Peter was married to costume and set designer Myfanwy Roberts before they divorced in 1972. The couple had two children, future renowned fashion and advertising photographer Ben Watts and future actress Naomi Watts, who would go on to star in David Lynch’s Mullholland Dr., 21 Grams, The Ring and 2005’s big-budget remake of King Kong.

In 1976, Peter was found dead in his London apartment of a heroin overdose. He was 30.

His daughter Naomi still enjoys listening to his recorded laugh.